Harvesting Guérande Salt: Not A Disappearing Art. Yet.

Marie-Thérèse Aumont picks out a black speck from the snowy mountain of fresh salt.

“It’s alien, it shouldn’t be here,” she says crossly. “This entire mound might be contaminated.”

That would be bad news indeed, given the amount of work it takes to harvest a pile of salt here in the Guérande peninsula (pronounced gay-rawnd) in northwestern France’s Loire-Atlantique region.

Each morning, rain or shine, Marie-Thérèse jumps into her car for the five-minute drive down the hill into the salt marsh.

Depending on the season, she’ll rake, sift, water, drain, build, prune, clear, dam, or stir, each gesture perfected by generations of salt harvesters who have fine-tuned the art of gleaning these crystals from the sea.

“My grandfather and my uncle were salt harvesters,” she explains. “I left the region to work but it drew me back.”

She eventually traded her job in the city for the life of a paludière, or salt harvester, a decision she doesn’t regret. She is one of only 30 or so women among the more than 200 Guérande salt harvesters.

“New materials mean equipment is getting lighter, so more women are entering the profession,” Marie-Thérèse tells me. 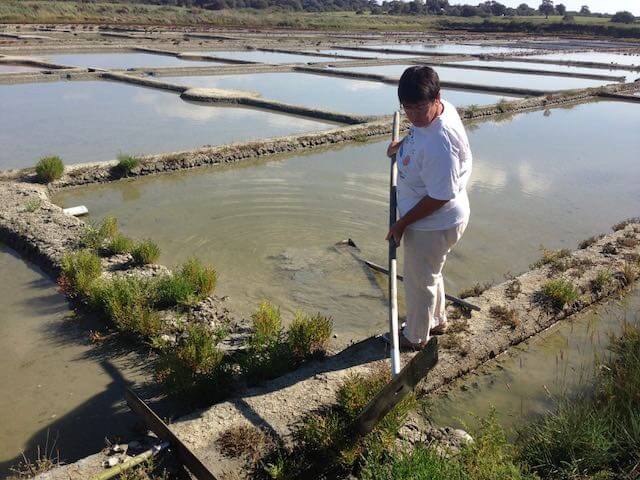 Marie-Thérèse demonstrates her art; when she isn’t on the marshes, she is vice-president of the regional salt cooperative

The 59-year-old skips lightly across the low mud walls that separate the salt ponds from one another, pointing animatedly at the still pools of water. She doesn’t fall off, as I almost do following in her footsteps.

Her days are long, up to 12 hours during the harvest, under the beating sun and amid the buzz of mosquitoes. Yet each season is different, and there is no typical day: the weather rules all.

“In winter, it’s all about maintenance, cleaning the canals, removing the sediment and maintaining the vegetation. Then in March we have to get rid of extra water and seaweed, and rebuild the mud walls. Summer is when we harvest and deliver and in autumn things wind down — it’s when we take our vacation.”

The salt harvester’s real job is to manage water, a true engineer of the marshes, calculating water quantities and second-guessing the rain. It all looks simple but as Marie-Thérèse tries to explain, I realize how complex an operation this really is: large pools collect water when the tide comes in, eventually releasing the captured water into canals and smaller pools. As water flows from pool to pool, it heats up and evaporates with the sun and wind. Eventually it reaches the smallest pools, the œillets, where it becomes so concentrated salt crystals are formed.

The best of the crystals, the bright white fleur de sel, are the ones that sit on top of the water, with the less sought-after gros sel or sel gris found underneath, grey from contact with the mud.

Even salt has a hierarchy.

The good news: you can order your Guérande salt

The salt of salts

I’ve been fascinated by the little white crystals ever since I read my first fleur de sel label on the small cardboard tins in my mother’s pantry.

Flower of salt. It sounds exotic, almost ethereal. This is salt you sprinkle with your fingers, its crystals too large to pass through an ordinary salt shaker.

It’s not even designed to salt food, but to flavor it. A pinch lifts a steak out of its misery, and turns an asparagus or an artichoke into an adventure. This isn’t salt you dissolve but salt you gently drop onto a lovingly prepared feast, watching it sit, proudly, refusing to melt away. (Except when it’s used to make one of the best salt toffees I’ve ever tasted. Then you can go right ahead and melt.)

The Guérande fleur de sel is special, and Marie-Thérèse dismisses the thought of that ‘other’ Mediterranean salt with a wave of her hand.

“That’s all machine-picked with bulldozers, and then washed,” she explains. “In Guérande it is done by hand, by tradition, without additives.” 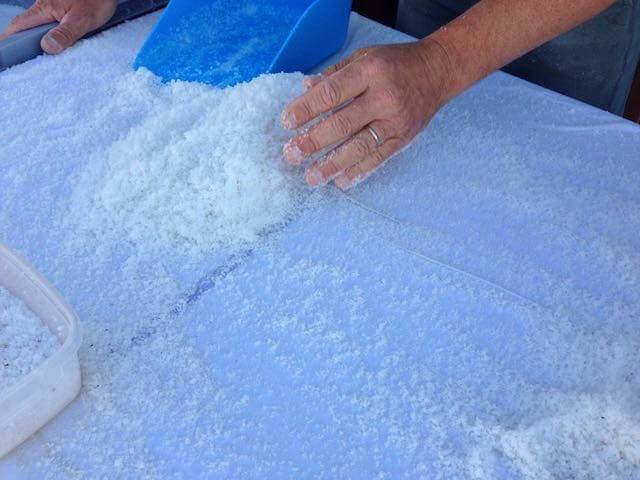 Fleur de sel being sorted by hand to remove even the tiniest imperfections — a painstaking job. To many, this is the best salt in the world

Experts can taste the difference, and this particular salt is so popular it has engendered copycats; a special label of origin granted in 2017 should help curtail any contraband.

These days salt is inexpensive and easy to find, innocuous really, so it’s easy to forget how prized it once was.

“Salt is the only rock directly consumed by man,” says culinary author Margaret Visser, in her book Much Depends on Dinner.

“It has fascinated man for thousands of years not only as a substance he prized and was willing to labour to obtain, but also as a generator of poetic and of mythic meaning. The contradictions it embodies only intensify its power and its links with experience of the sacred.”

Salt was widely used by the Ancient Chinese and Egyptians but its existence goes beyond recorded history, into prehistory.

There are apparently more than 14,000 documented uses for salt. It is used as a preservative (for food — and for Egyptian mummies), for flavor (not too much these days because of high blood pressure fears), as an essential mineral for people and animals, as money, as medicine, as a sign of friendship and hospitality, as part of religious rituals (to symbolize purity), in industry, or for those of us who have slipped and tripped in the winter cold, on icy roads. Salt is even believed to have magical properties and protect people from the evil eye (don’t you sprinkle salt over your shoulder when you spill it?).

Nations gone to war over these little tasty grains. 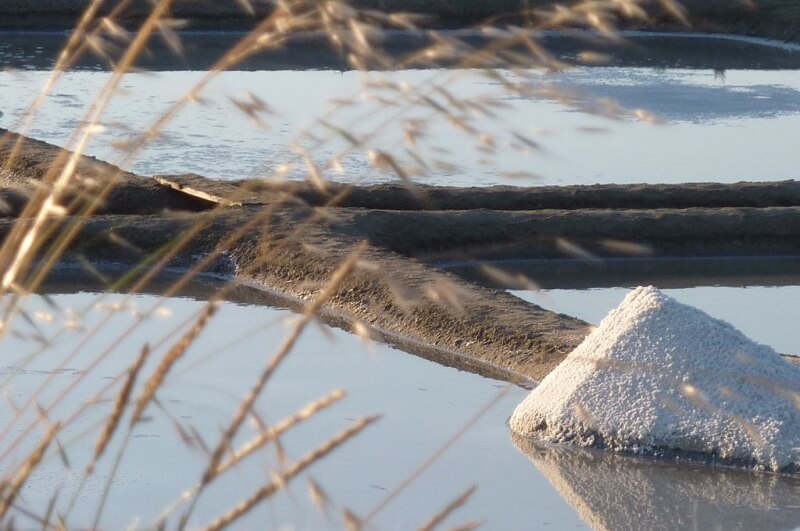 Salt, known to high-school chemistry students as sodium chloride, has been called ‘white gold’ and was enormously valuable throughout history.

In France, the gabelle was an unpopular salt tax that sparked smuggling and rebellion and was even used as punishment.

According to Mark Kurlansky, author of Salt: A World History, “A 1670 revision of the criminal code found yet another use for salt in France. To enforce the law against suicide, it was ordered that the bodies of people who took their own lives be salted, brought before a judge, and sentenced to public display.”

There was just no getting away from salt. 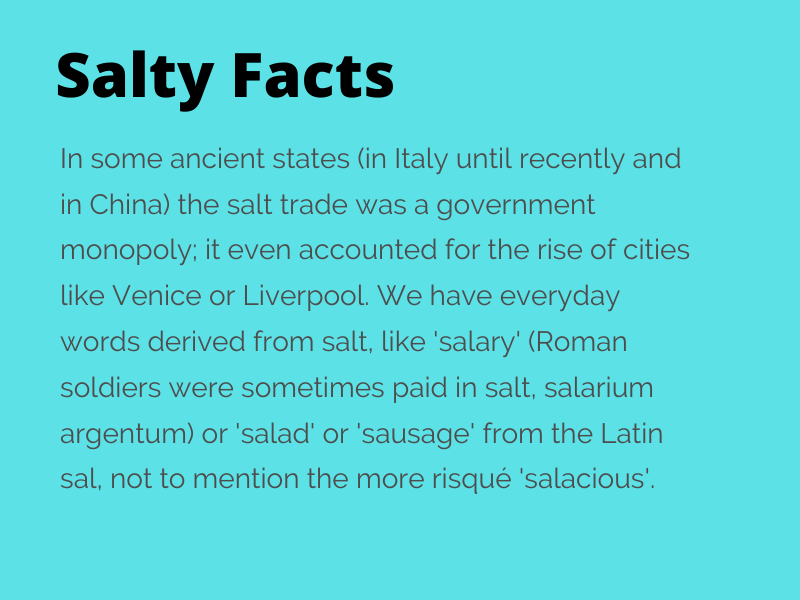 When Marie-Thérèse eventually retires, her work won’t go to waste.

“More and more young people are becoming salt harvesters, and out of the ten or so that apply for training each year, all but two stay on.”

It’s hard to imagine her retiring, with her short dark hair and sporty sandals, a smile never far from the corners of her mouth. What’s less clear is whether she is part of the old guard or the new wave.

As tradition slowly edges out of modern life and into history books, France fights on the one hand to modernize, and on the other, to preserve its old way of doing things — especially when it comes to food.

It isn’t an easy life, but it’s a simple one, with each season’s fresh task neatly laid out.

When I arrive at the marsh it is late on a summer afternoon, when the air is dry and sleek and almost smells of violets. The fleur de sel has been raked for the week and sits in a mound by the water’s edge, awaiting its fate from the lab results. The results will determine the future of that snowy mound which, to my naked and inexperienced eye, looks rather acceptable, but that Marie-Thérèse is ready to discard if it is anything less than utterly perfect.

No matter, it’s all worth it.

“Don’t ask me to find anything wrong with this life,” she clucks. “I’ve been harvesting salt since 1980 and I love it.”

If you travel to Guérande