You'd be forgiven for thinking you are witnessing a Freemason ceremony, what with the robes, staffs and secrets, all led by an austere Grand Master.

But when these men – they are still mostly men – swear allegiance, they aren't paying their respects to a deity or moral force.

No, the object of their adulation is... culinary: brie, for example, or garlic, or wine. Often wine.

These are the confréries of France, the 1500 or so ancient brotherhoods born of medieval guilds and now dedicated to promoting regional delicacies, France's produits du terroir, which loosely translates as local products. 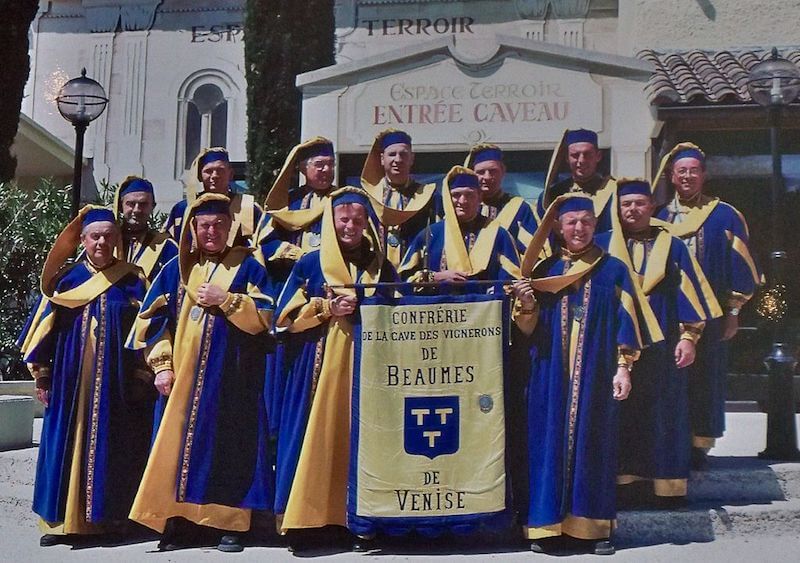 Olives, Olive Oils and the Brotherhood of the Olive Tree

I first came across these brotherhoods on a visit to Nyons (pronounce nee-owns), in the lavender land that straddles the border between Rhône-Alpes and Provence. Nestled at the edge of the Drôme département, Nyons is the proud home of La Tanche, a dark brown olive you won’t find anywhere else.

Draped in green velvet capes and felt hats, the representatives of this particular brotherhood were here to promote La Tanche. 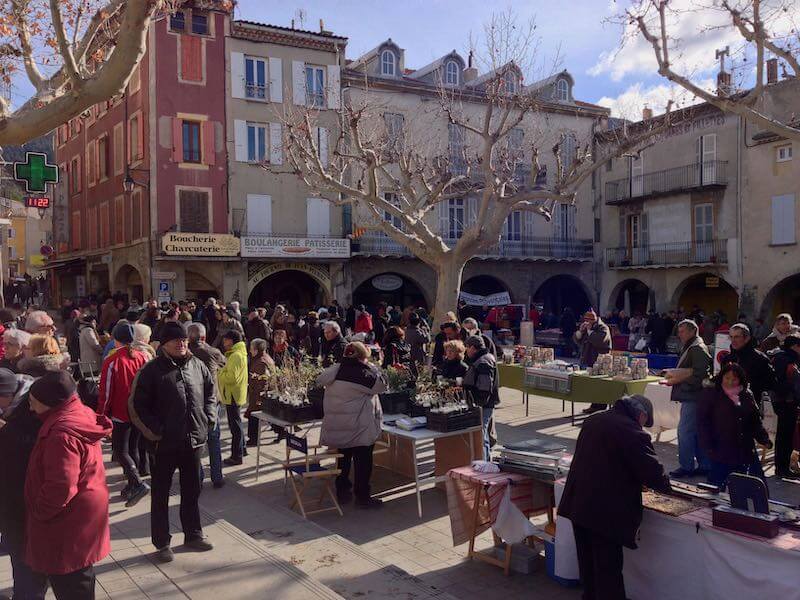 Lined up along wooden tables, extolling the virtues of this olive (and olives in general), the members of the Knights of the Olive Tree spent a bright winter day in good cheer, surrounded by admirers and amateurs.

When Athena, Goddess of War, presented the Greeks with an olive tree, she didn’t know what she was unleashing. She was vying for popularity with Poseidon: the one with the best gift would get to name Greece’s capital. As we know, the Hellenic capital is not called Poseidon City. The best he could come up with was a saltwater well.

From Ancient Greece, the gnarled, spare olive tree spread to Rome and beyond until a few grains landed around Olives, and specifically olive oils, have become more rarefied and made the jump from everyday staple to classy condiment, a little extra that can transform a good meal into a great one.

And the dove came back to him in the evening, and behold, in her mouth was a freshly plucked olive leaf. So Noah knew that the waters had subsided from the earth. (Genesis 8:11)

Promoters caught on to their growing popularity and the first Fête de l’Alicoque was born, celebrating the year’s first harvest, the huile nouvelle, just like wine celebrates the Beaujolais Nouveau.

I arrived in Nyons just in time for the festival, which has been going on for more than three decades, buffeted by wild February winds that pierced my skin much as a Canadian winter might. The sun, high in the sky, reminded me we weren’t that far from the Mediterranean and that yes, olives could grow and prosper here as they since the dawn of humanity.

Indeed, after the biblical deluge, wasn’t that an olive branch the dove brought back to Noah?

The Alicoque is typical of these deeply French affairs – a foot race, a chorus, musicians, guided visits, traditional dance, and of course, a tasting, during which hundreds of enthusiasts jostle for a place at the long table to taste the New Oil, drizzled over dried croutons (don’t forget to rub them with a piece of garlic first) and chased down with copious amounts of wine.

At attention behind the table, a few dozen men (and a handful of women) in olive green capes and felt hats serve citizens and hold court, like members of some long-forgotten lodge, replete with oaths and Grand Masters and initiation rites involving an olive branch. This is the Confrérie des Chevaliers de l’Olivier, or Brotherhood of the Knights of the Olive Tree, whose sworn duty is to protect the olive tree.

Madame Laget is a vivacious olive grove owner who feels right at home at the festival. “There aren’t many women in the Confrérie,” she said proudly, “and I’m one of only five women who is allowed to wear the green cape.”

As traditional as the costumes look, this Confrérie, or brotherhood, is relatively new, created a mere half-century ago in response to the devastating freeze of 1956, which killed two-thirds of France’s olive trees and put many farmers and producers out of business. The brotherhood helped put olives and olive oil back on the map, much like other confréries have done for their products.

What really matters is the product

Today I was ready to be set straight, although tasting pure olive oil out of a small plastic spoon isn’t what I’d call a gastronomic delight. Still, the tasting is a necessary path to understanding the subtleties of a product so proudly promoted throughout the Mediterranean.

“Olive oil has been extracted the same way for 5,000 years: the olives are crushed, and the paste is pressed to get the oil. What has changed are the tools used to do this,” said Alexandra Paris, a spokesperson for the AFIDOL, the French professional olive association set up to improve and promote French olive oils.

“Fifty or sixty years ago production methods were different, we used a fiber scourtin to press the oil, and storage and quantities meant the taste of olive oils was more pungent, stronger. It marked entire generations and in France we want to preserve this taste, which you’ll find nowhere else.”

While the Nyons variety is classified as Subtle, I also ventured into Intense and even Old Fashioned, like grandmother’s, I was told. The oils did taste nutty as promised, but also like apples, like grass, and one even tasted of rocket, sweet on the tip of my tongue and increasingly sour and tart as the taste rolled down my throat. Another left a buttery aftertaste which took several swigs of water to eliminate.

Surprisingly, the olive oils didn’t smell the way they tasted.

Apparently the taste is influenced by the region, the type of olive, their maturity and the extraction method, quite a palette of factors. No wonder there are more than 1000 varieties of olive oil worldwide.

As I walked around Nyons I found it everywhere, on tables to spread on bread, or in soups, as an ethereal thread clinging tenaciously to the surface. 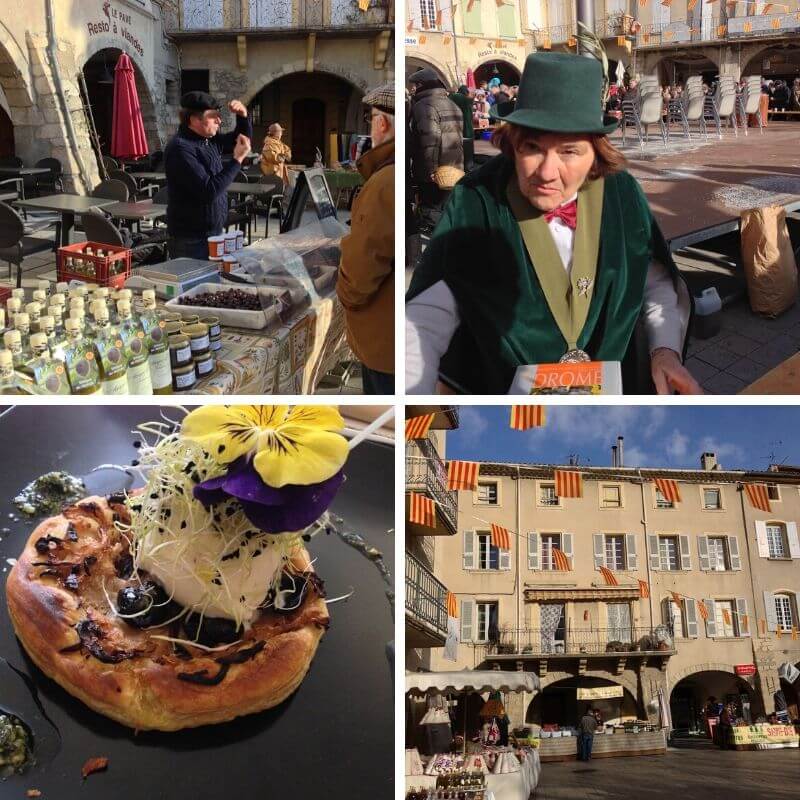 Clockwise from upper left: oil-based products for sale in Nyons, Madame Laget of the brotherhood, a vista of the main square of Nyons, one of the many olive-based dishes available in restaurants during the Alicoque

In France olive oil has its own cultural touchstone. In his poem Les Olivades, Nobel-prizewinning poet Frederic Mistral immortalizes the olive tree and speaks of offerings of virgin oil on the altar.

Olive oil, or liquid gold, as some would like to call it, is of course a food condiment, used for cooking but also as a flavoring, poured lightly on salad or potatoes or pretty much anything. It also has other, more surprising uses, from burning it for light, using it in religious ceremonies and as a skin moisturizer, furniture polish, hair conditioner, lice treatment, hairball preventer, and, dribbled warm, a cure for earaches.

In Ancient Greece, athletes rubbed it on their bodies to protect their skins and give their bulging muscles a sheen. It was also a healer, which Hippocrates, the Father of Medicine, said could heal many ailments including so-called “diseases of women.”

If Athena were to come back for a visit, she might be surprised to see some of the results of her little gift. I mean, olive jam? Olive, verbena and marshmallow ice cream?

But I digress, led astray by my culinary enthusiasm. Back to the brotherhoods.

The inner workings of a confrérie

By swearing this allegiance, adherents promise a number of things, the foremost being the promotion of the product they represent.

These brotherhoods can gain plenty of influence, hosting presidents and politicians, especially if they represent a valuable product. Often, they include in their ranks local dignitaries, food and wine specialists, or local politicians.

They come in all sizes and shapes. In food, you'll find the brotherhood of the Chocolatine (pain au chocolat), of pink garlic, of the Carpentras strawberry, of the Burgundy snail, of brie or camembert... and I could go on and on, not to mention all the brotherhoods representing wine.

France even has a charter that governs these brotherhoods and includes such obligations as remaining apolitical and non-discriminatory, obeying laws, transmitting knowledge and acting as ambassadors for their various products. An interesting clause involves not falling into a "grotesque folklore", reflecting instead a certain art, seriousness and quality.

Throughout the year, brotherhoods hold their own meetings but in summer, they often come together with other brotherhoods, especially at festivals like the Alicoque. They may also gather along food types, or regionally, or even hold get-togethers with brethren in Belgium, Spain or Italy! 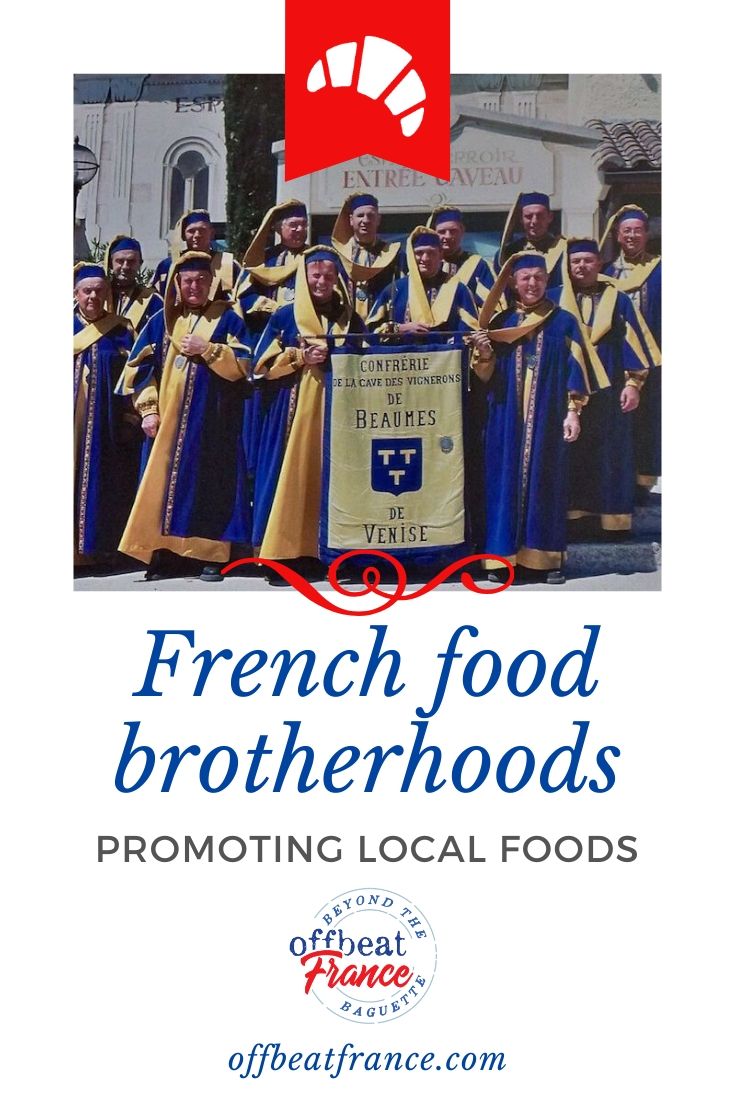 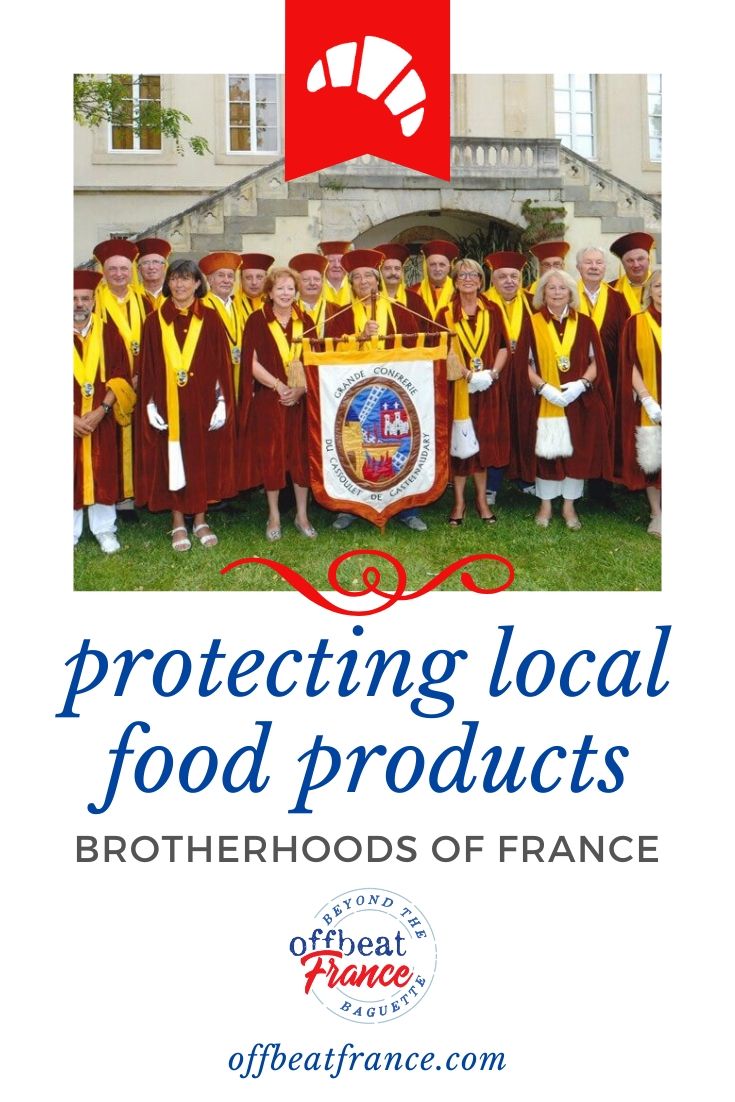 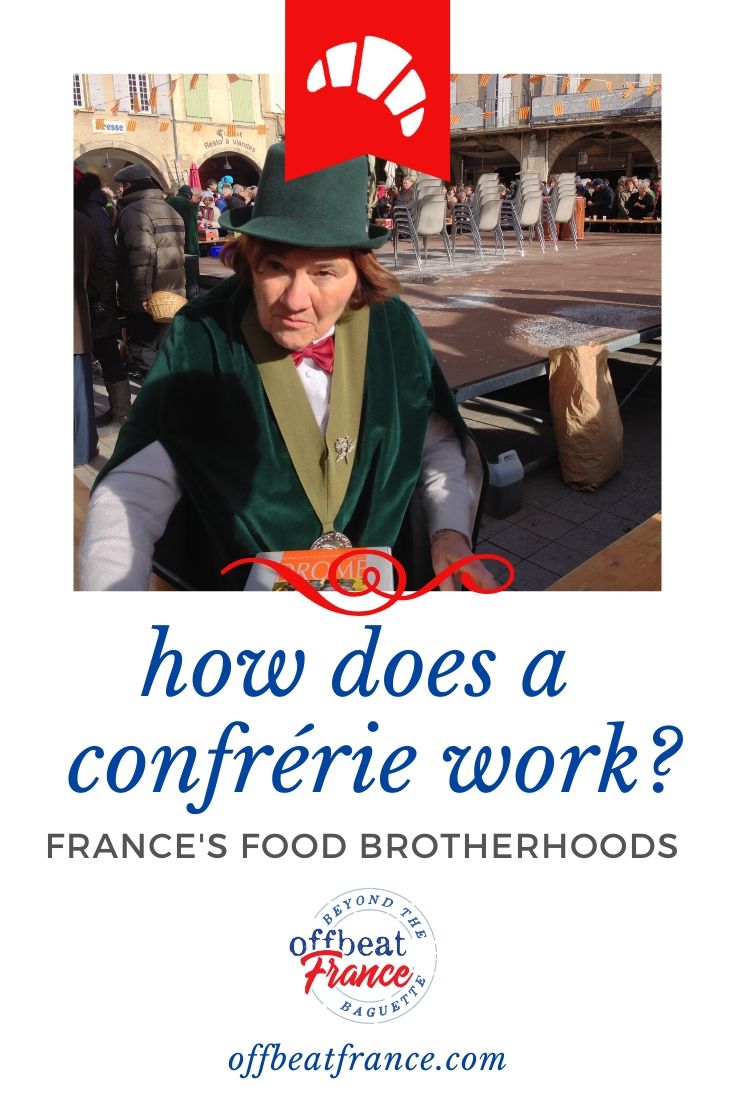