14 Obscure French Drinks you can try on your next visit

As you travel, you have probably become familiar with classic French drinks like Pastis, Kirsch, Cognac, Cointreau, and of course, Champagne and wine, preferably sipped while sitting in a Paris café. But you'll just be scratching the surface, because there are plenty of hidden French beverages that are popular at home but haven't necessarily made it across a border.

So without further ado, here are some French drinks that just might be unfamiliar to you. Or not.

Forget the most popular French drinks. Instead, let's look at some of the lesser-known  drinks in France you can enjoy as an aperitif, a digestif, or simply as a refreshment.

These liqueurs in France may not be on your radar screen but are worth trying.

Who said alcohol couldn't be healthy for you? Just kidding. But what sets this French beverage apart from others is that it's made from 27 herbs and spices! The recipe for Bénédictine is said to go back to the 16th century.

It was later modernized by wine merchant Alexandre Le Grand with the help of a local chemist who marketed the drink as being developed by the monks of Benedictine Abbey of Fecamp in Normandy.

You'd think Bénédictine would taste like a cough medicine since it was partly developed by a chemist and contains so many herbs. On the contrary, it's rather aromatic with hints of sweetness and is sometimes used in other cocktails such as The Ford and Greyhounds Tooth, or as a French after dinner drink. 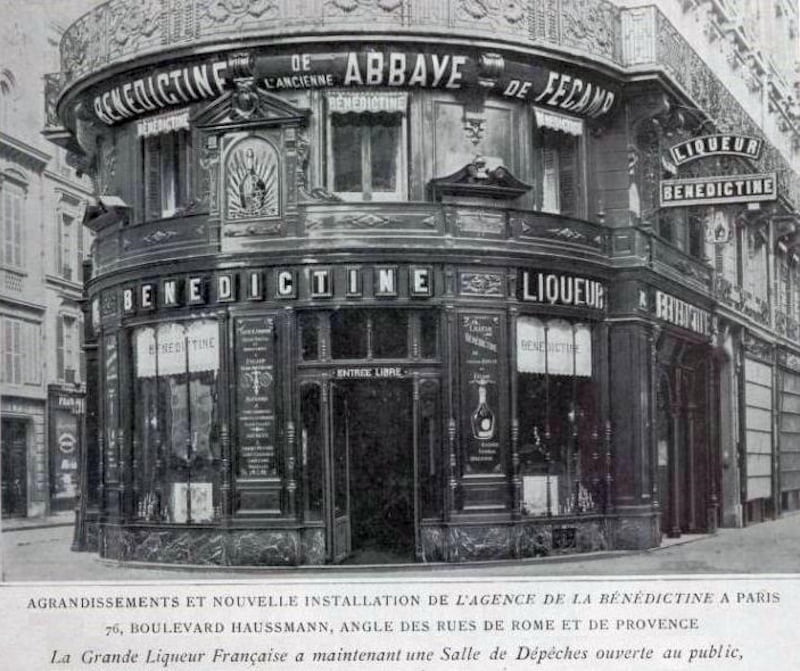 Chambord is a newcomer to French alcoholic drinks scene and far less popular than other liqueurs and spirits. Production of Chambord only began in the 1980s but was inspired by a 16th-century raspberry liquor produced in the Loire Valley.

It also pairs well with other alcohols like champagne or white wine for a unique and fresh French cocktail.

At first glance, Chartreuse also looks like  cough medicine you'd buy over the counter at a pharmacy. And containing over 130 herbs, it's not hard to believe why.

Chartreuse is the only liquor in the world that has a natural green color. It was first developed by Carthusian monks back in the 17th century. It's known as the "Elixir of Life," believed to grant good health to anyone who drinks it.

Apart from the 130 herbs, it has flowers, plants, wine, and "secret ingredients" known only by a few people. It has quite an earthy taste, so if you want to stay healthy – this is the drink for you. You can drink it as a digestive, or mix it into cocktails.

What's there not to love about a French drink that mixes caramel and beer? Doesn't sound as though they should go together, yet Picon Bière is the perfect mix for those two ingredients. Picon is an aperitif from northeast France and while a little unusual, it is highly appreciated.

Take dried oranges and distilled alcohol. Then add caramel, sugar, syrup, gentian, and cinchona flowers. To get Picon Bière, simply add beer to the aperitif. The sweet flavor of the Picon helps to break down the bitterness of the beer, elevating the drink.

This mixture of grape must and cognac is a fortified wine highly popular in western France but less well-known elsewhere in the country.

Legend has it that its creation was accidental and it was created when the grape must was poured into an empty barrel and left to ferment. When the barrel was opened years later, it turned out not to have been empty – it barrel contained cognac, and the Pineau des Charentes is the result. Drink it chilled, as you would sherry.

It comes in white or rosé. 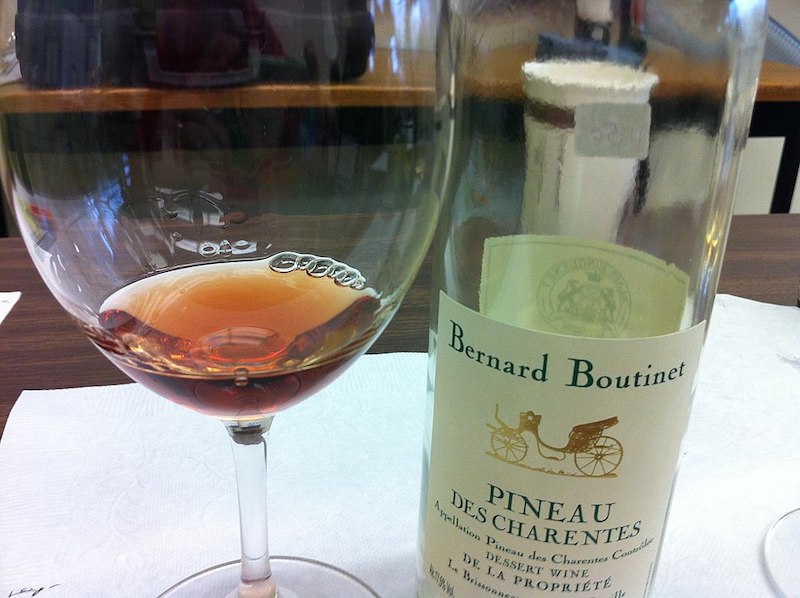 These traditional French drinks are fruit brandies, and can be made from any fruit other than grapes. Here are a few of the more common ones but there are others.

The most popular come from the Alsace region and the name means "water of life".

A FEW WORDS IN FRENCH

It's no secret that the French produce an abundance of excellent wines – Alsace, Beaujolais, Bordeaux, Burgundy, Corsica, Languedoc, Loire Valley, Provence, Rhône... But here are two you might not have heard about.

While Hypocras (also called Hippocras) can be traced back to the late 13th century, its rarely produced in France today. It's an ancient mulled wine made from red wine and sugar, or honey.

A dash of fragrant spices such as cloves, cinnamon, ginger, and cardamom are also added. Today it's produced in small quantities in little villages around France, such as Ariège.

The "vin jaune", which means yellow wine, and it comes from a small, little-known wine-producing area called the Jura, which is located right between France and Switzerland.

These wines are golden in color and are perfect for the region's hard cheeses, especially Comté, which is also from the region. 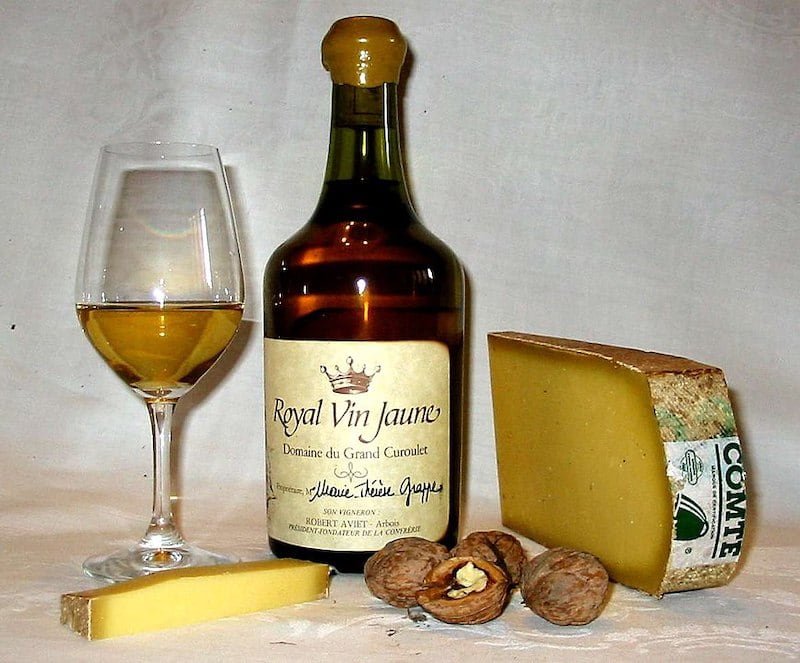 Here is a mix of other French alcoholic drinks – those that don't fit into any of the categories above.

This is an incredibly powerful drink, so powerful it was forbidden in France for the better part of a century.

It has an old history and you can find mentions of it in Ancient Egypt, Greece and Rome, and was mostly used as medicine or as an aphrodisiac.

Modern absinthe distilled from fennel and green anise made its appearance at the end of the 18th century. Good for the stomach and for tropical diseases, its popularity spread in the 19th century during the Belle Epoque and by World War I, France had more than 1000 brands of absinthe.

Within a year, it would be banned in France, accused of causing brain damage and criminal behavior, a move supported forcefully by various anti-drinking associations.

Prohibition was lifted in 1988 for a component of absinthe, which would allow the drink to be manufactured again. To drink it, dilute with water, as you would Pastis. 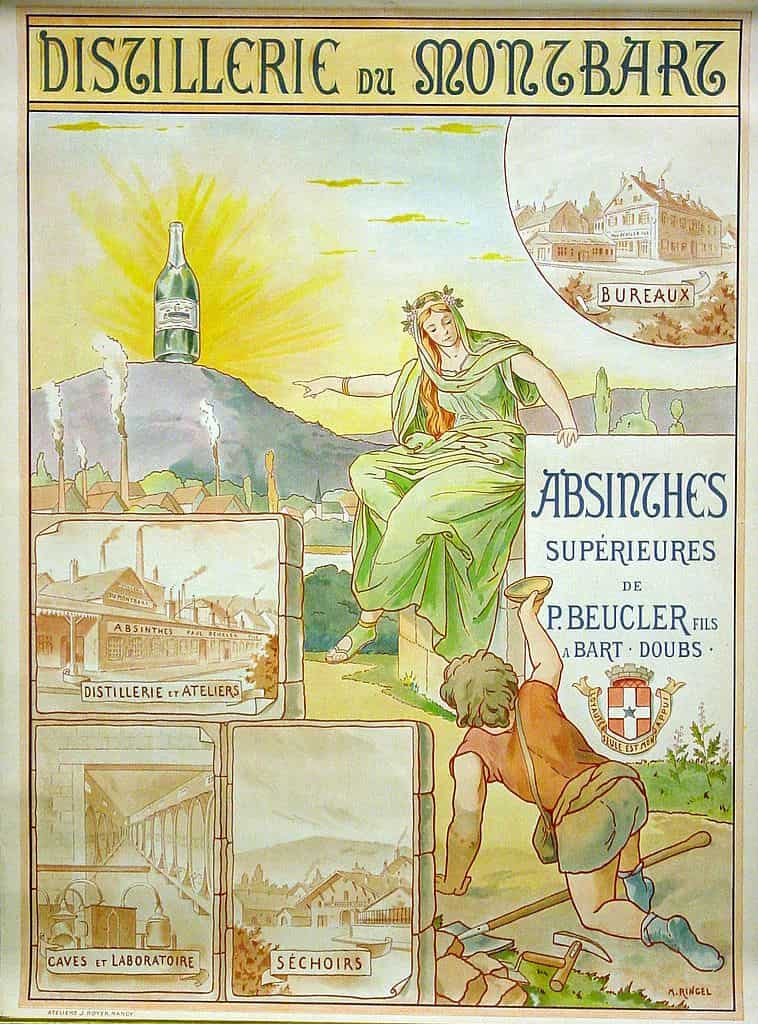 Most visitors will hear much about Kir and Kirsch, the cherry liqueurs. But not many people know about Guignolet d'Angers. It's a Guigne cherry liqueur made according to a traditional maceration method.

It's then mixed with alcohol and darker, sweeter cherries. Guignolet d'Angers can trace its roots back to the 16th century when it was made by monks living in the Angers region.

Today most people enjoy it chilled over ice or with a nice cold white wine or champagne – similar to Kir Royal.

Can't decide whether you want a beer or something sparkling? That's where Panaché comes in. It's a unique take on a French cocktail made from beer and soda, usually 7-Up or Sprite.

If you're not a fan of heavy alcohol in general, Panaché is the perfect alternative because of its low alcoholic content. It's also great if you're trying to have an easy night, and it won't go straight to your head. It also happens to be one of the most popular drinks in France. In Britain, it's known as a shandy...

Not a big fan of alcohol? Here are some of France's best non-alcoholic drinks.

Pepsi is often the alternative to Coca-Cola in many parts of the world. In France, however, it's a bit different, and one of the favorite French cold drinks is Breizh Cola, proudly French, produced in the region of Brittany in 2002. It's the first regional cola from France and has its own secret recipe and distinctly Breton identity.

Locals are incredibly proud of it, so if you're looking for things to do in Brittany, be sure to take a trip to the Breizh Cola factory to learn more about it. Besides the original cola flavor, you'll also find it in Breizh zero, citrus, and iced tea.

This refreshing lemonade with a twist is one of the most popular French drinks in summer. It's super simple and made with only fresh lemon juice, water, and sugar. The difference is that unlike other parts of the world where the drink comes premixed – you have to mix the Citron Pressé yourself.

This is great because, depending on your taste buds, you can make it as sweet or sour as you like. And it can pretty much be enjoyed with any meal or snack.

These are syrups, usually quite sweet, which you mix with flat or carbonated water. They come in many flavors, mostly fruity (my favorite is mint).

In summer, when it's hot outside, look around any café and you'll see entire tables sipping sirop, children included.

There are also plenty of soft drinks in France that you may be unfamiliar with – Orangina, anyone? Otherwise you'll find the same range here as in many other countries.

Final thoughts on drinks from France

I hope I've given you some ideas for drinks in France you may not have thought about, as more famous French beverages usually overshadow them.

But they're uniquely French and absolutely worth trying, if only to taste the drinks we French drink throughout the year.

You now know about some of the most exciting drinks from France – why not check out the most famous French foods with which you can pair them?

—Header photo by Paul Joseph via Flickr CC BY 2.0