A day in the life of louis xIV, sun king

While we may occasionally feel envious about the lives of the rich and famous, this snapshot of a day in the life of Louis XIV should help us feel very grateful for what we have.

Given the choice, I'd have to turn it down, but that doesn't mean I can't be just a little curious.

Louis Quatorze, as he is known in France, was an unlikely king.

He was only four years old when his father, Louis XIII, died. His mother took over and became regent while his godfather, Cardinal Mazarin, became chief minister. (The cardinal and the queen, by the way, did NOT have an affair, as is often suggested.)

Together, these two co-conspirators ruled France and brought up the young king as a young king should be.

The little king was precious: It had taken his parents nearly two decades to give birth to a son, so they called him Louis-Dieudonné, meaning "Gift of God". He would grow up actually believing this.

Yes, he was raised to believe he was supreme in pretty much every way, including spiritually. If you disobeyed him, therefore, you would be sinning.

The deeply Catholic young man would forever believe he was the center of, well, the universe.

It is legal because I wish it.

And why was Louis XIV called the Sun King?

It's a name he gave himself!

So when Mazarin died in 1661, Louis disappointed everyone: he was now 22, and he decided he was an adult. He refused to appoint a replacement and much to his mother's distress, he simply took over, ushering in an era of absolutism, or absolute power, which is one of traits we remember most about this Louis.

Powerful as he was, King Louis the Sun King might, by our contemporary measure, have had absolute power over the lives and deaths of his subjects. What he did not have, however, was power over choosing when to go to the toilet.

The emergence of Versailles

When Louis XIV was a child, things in France were messy.

A civil war called La Fronde made it impossible for him to stay in Paris, and later in life he never really took to the capital. He far preferred the hunting lodge at nearby Versailles, where he had played as a boy, and quickly began to transform it into what would become the grandest and most opulent of palaces.

In 1682 he moved permanently to Versailles, along with the entire court — courtiers, their families, their servants, and all the trades needed to service what was in effect a 700-room home to thousands (on any given day, 3000-10,000 people made up the court at Versailles). 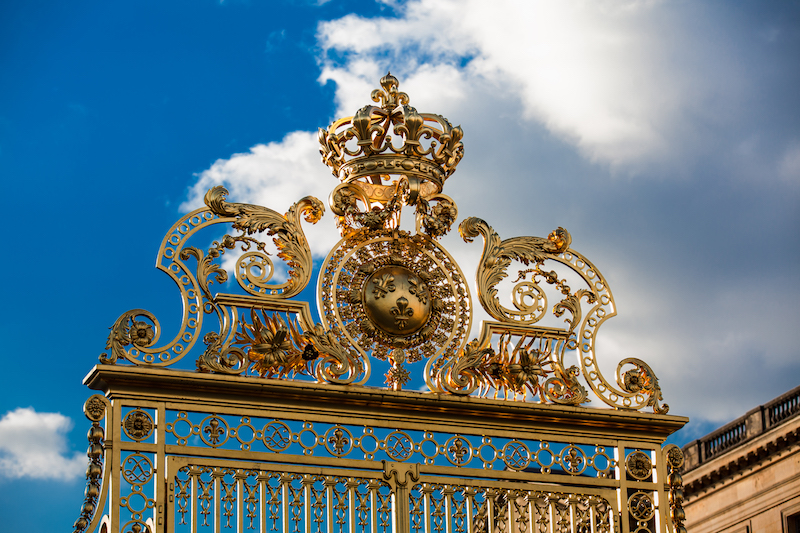 Nobles had no choice: they couldn't choose to live in their own homes. If they were away, Louis would notice and their chances for advancement (or even sometimes survival) would evaporate. So they stayed put, bound by the strictest protocol, in a suffocating atmosphere in which their lives were led at the whim of a dictatorial (though not unkind) monarch.

And by the way, this wasn't all Louis's idea — this heavy etiquette began under François I, a century or so earlier, born of a need to codify even the smallest of the king's movements just to highlight his superiority to the rest of the population.

On a more practical level, managing a bureaucracy of thousands in the days before email or Whatsapp did require complete predictability and perfect organization.

a day in the life

Like the rest of us common mortals, Louis XIV would start his day the same way: by waking up.

Waking up at the Palace of Versailles: King Louis in the morning

At 8:15, the king's valet would awaken him, though we don't know how. Did he nudge him? Whisper in his ear? Shake the royal person by the shoulder?

What we do know is that the valet poured a drop of wine into the king's hands and a chamberlain entered with holy water, which the king used for a quick sign of the cross. He would then, propped up in bed, attend a mini-mass.

Once the Petit Lever (or Little Awakening) was over, the king would rise, put on his slippers and bathrobe, and prepare to be made presentable.

At 8:30, the royal physician and surgeon would give him a quick check-up. Important nobles, family members and a few favourites would be allowed into his chamber while he was being readied — washed, combed and shaved.

And so would the Grand Lever, or principal awakening, begin.

The king would then sit on his "business chair" (yes, the toilet) and do his business while his barber combed his beard. The barber would also position the king's "casual" wig (he would change it later in the day to something heavier and more ceremonial — he did, after all, own about 1000 of them). By the way, attending the king during his "business" was a much-prized position for which nobles would vie. That said, I'm not quite sure what the "attending" part involved...

At this point, countless helpers of every stripe would be helping the king change from his nightshirt into his day clothes. Up to a hundred or so (male) spectators might be watching all this, including notables, guards, wardrobe officials and close royal servants.

Finally, at 9:00, it was time for breakfast, usually herbal tea or vegetable bouillon. The king would take a few minutes to choose the day's menus, the master of the clocks would make sure the king's timepiece was correct, and the barber would switch the king's wig to the more formal model.

Then, at 10am, the king would lead a procession along the extraordinary Hall of Mirrors, which separated his grand lodgings from the queen's. Well-wishers would be lining the gallery, hoping for a glimpse of the king or, even better, an exchanged word or a slipped note.

The king would glide away to the royal chapel for mass.

It might have only been a walk down the hall but under this Louis, Versailles was very much a place of work.

At 11, having sat through mass, the king looked forward to two hours of work with his council of ministers (Monday and Wednesday), his gardeners and architects (Thursday), his ministers of finance (Tuesday and Saturday) and on Sunday, he dealt with the state of the nation. Fridays were set aside for affairs of conscience, especially confession.

In these many councils and gatherings, the king would listen a lot, speak little, and then decide. 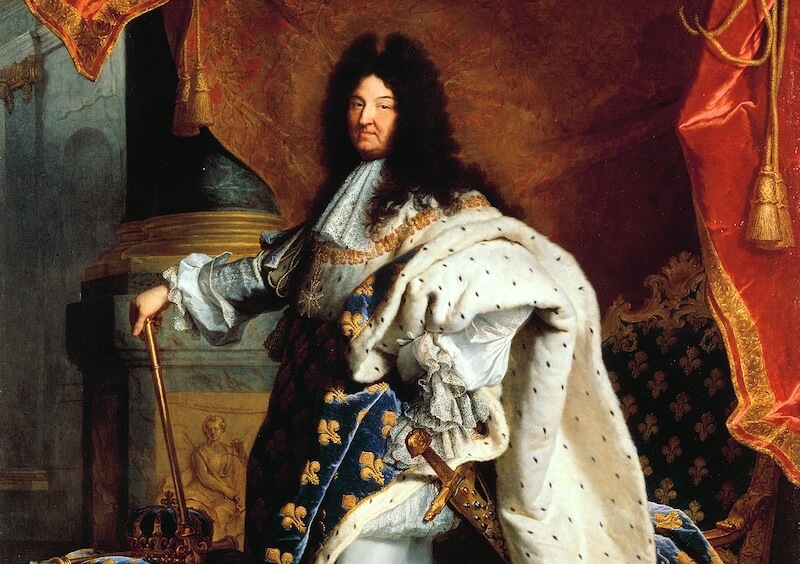 It's a rather long time to go without food (perhaps he grabbed an apple from a bowl on his way through the Hall of Mirrors) but lunch would only be served at 1pm.

And while it might seem at first sight that the king only worked two hours a day, that was not the case. He was always "on" — talking to courtiers, dealing with crises, signing documents (few things escaped his eye). The two hours before lunch were merely his "office hours".

This meal was relatively private. Louis is believed to have eaten alone, although some records say he would be joined by nobles, the same ones who watched him do his business earlier that morning. Not all historians agree and in some versions, only his brother Philippe would present during this smaller meal. 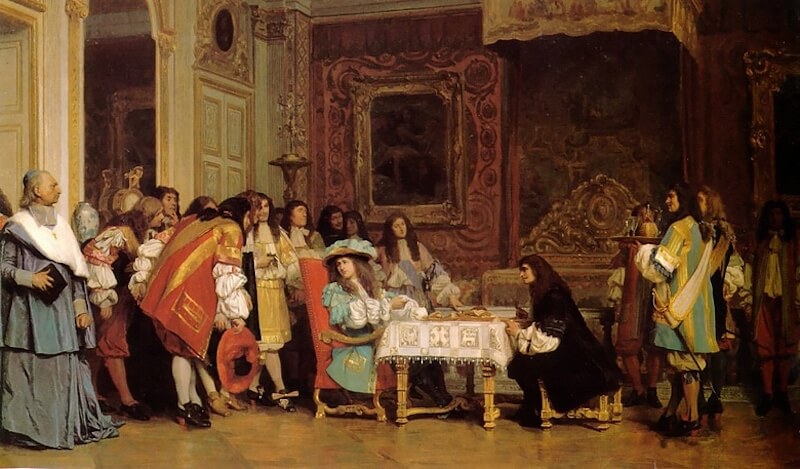 Or, in this case, Molière

All work and no play at the court of Louis XIV?

With his belly full and the country now under control, the king would turn to play in the afternoons.

By 5pm it was time for a snack, possibly some pâté and pastries, and a quick trip to the chapel.

Around 7pm, Louis would return to his rooms for some family time and a bit of relaxation, perhaps some music or a few card games, or maybe even a dance or two.

The biggest meal of all

At 10pm, well-wishers would crowd the king's antechamber as he readied for the Grand Couvert, or main dinner. His immediately family would sit with him but many would have had to remain standing.

Tasters stood by to sample every dish and drink, the king always in fear of being poisoned.

Finally, sated, the king would rise, greet the ladies who were part of court life at Versailles, and take his leave.

And then, at 11:30pm, his morning routine would start again, but in reverse.

The room would be crowded, but thin out as bedtime neared.

The only difference with the morning ceremony was the appearance of a candle servant: it was dark, unlike morning, and electricity was still a couple of centuries in the future.

Holding the candle was, by the way, a much-desired task and a true honour, handled by a different notable each night. 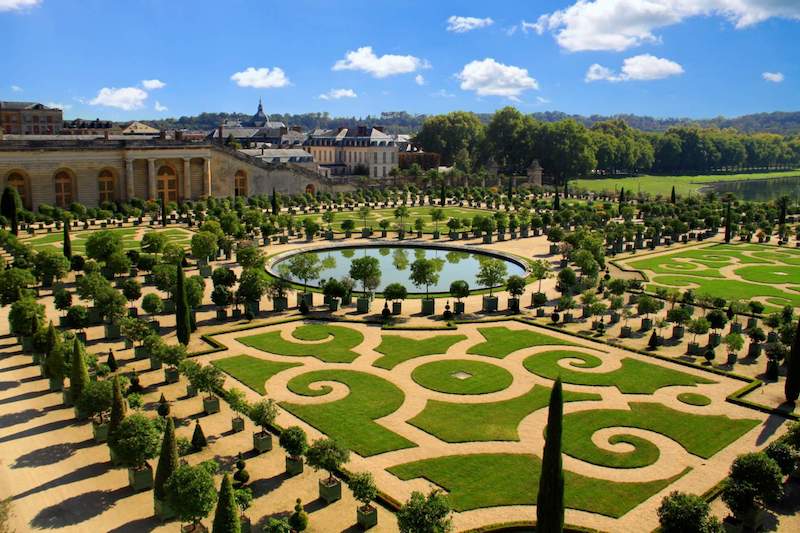 Day in and day out, throughout the reign of Louis XIV (which lasted a whopping 72 years and made him the world's longest reigning monarch), this precise system of etiquette was applied.

But just because things happened at a preordained hour didn't mean they happened in exactly the same way all the time.

The king, active and athletic, was well known for his mistresses, several of whom achieved supreme status, had his children and eventually saw them legitimized.

Our purpose today isn't to talk about history or the accomplishments of Louis XIV but for context, it's worth knowing that during his life, the arts flourished and he brought many things to France, from fashion to international diplomacy. The country became unbelievably prosperous and France's sway over Europe was unequalled. He bequeathed us every possible literary and artistic academy, and he bequeathed us Versailles.

But the king had overreached: his wars eventually led to defeats, debt and famine, and citizens rebelled. Much to history's chagrin, the deeply Catholic monarch eventually revoked the Edict of Nantes, which had given Protestants the right to practise. This made baptism compulsory and forced some 200,000 Huguenots, as they were called, to flee the country and seek religious freedom elsewhere. In his opinion, his faith was the only faith.

This king, whose daily existence was so perfectly stage managed, died of gangrene in 1715. He died much as he had lived: in control of his emotions and surroundings, an absolute monarch until the end.

Yet his legacy was not as solid as one might have thought.

While his artistic, architectural and political accomplishments were remembered and extolled, the power he wielded at court would never again be applied with such precision by future monarchs. It would take some time, but Louis XIV's descendants would eventually lighten the heavy ceremonial system, with public awakenings and beddings becoming increasingly rare.

Louis XIV was unique in history, and that is probably a good thing.

and a few final quick fAQs about louis XIV of france

Where did Louis XIV live?

The king spent most of his life at Versailles but before it was "rebuilt", the royal residence was the Palais-Royal, in the heart of Paris, which he hated because of riots that terrified him when he was a child.

When did Louis XIV rule?

How many children did Louis XIV have?

When did Louis XIV die? 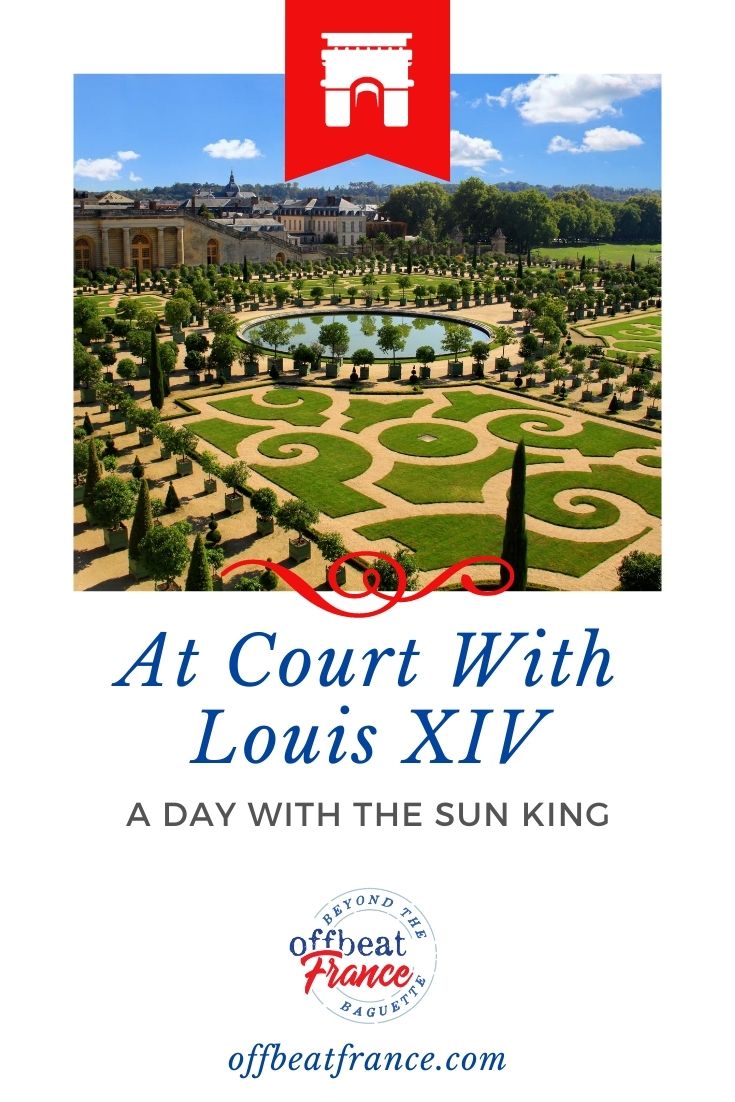 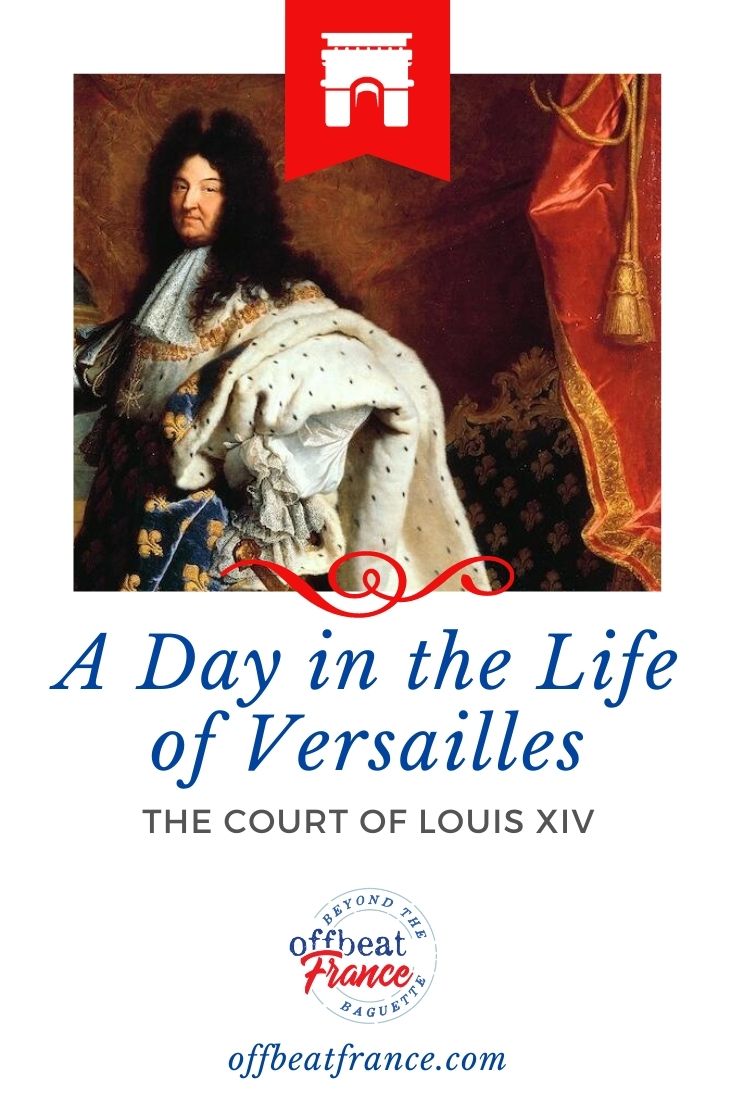 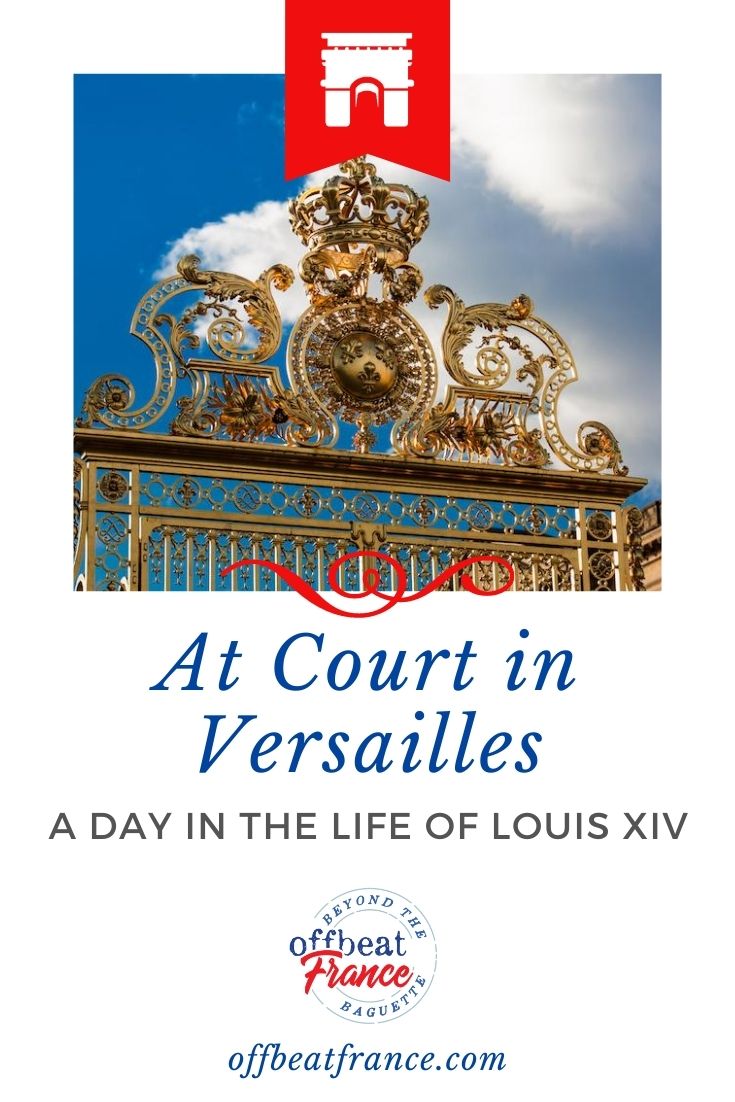 This Offbeat France travel blog goes beyond the baguette -– we explore curiosities, oddities and mysteries, searching for legends and backstories, all wrapped up in a passion for history. (Along with plenty of food stops and many castles – I am French, after all.)