How Queen Victoria Put Aix-les-Bains On The Map

She may not have been the first, but Queen Victoria’s presence in the French alpine town of Aix-les-Bains is probably among the best-known and most fondly remembered.

Bluntly said, she put Aix (as it’s known by those on a first-name basis with the city) on the map.

has anyone seen my tiara?

In the latter years of the 19th century, you couldn’t walk a block in Aix without tripping over a crowned head or a billionaire industrialist.

From the Aga Khan to the King of Greece, from Empresses Eugenie and Sissi to maharajas, princes, writers and prime ministers, all jostled for seats in the gardens of exclusive hotels or for a table in the avant-garde restaurants of the era. Few would be caught dead missing a season in Aix. 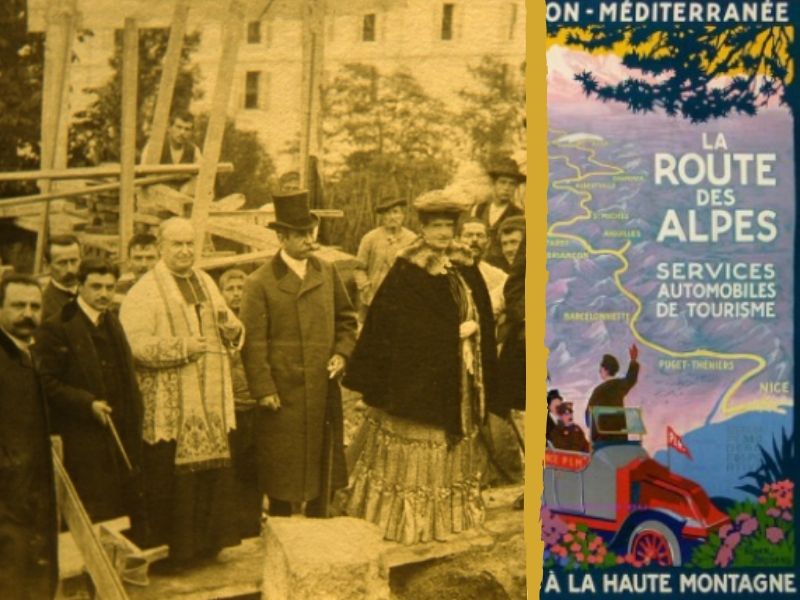 Left, Queen Maria Pia of Portugal dedicates the cornerstone of the Excelsior Hotel, one of the city’s most luxurious. Right, a poster announcing the new Paris-Lyon-Mediterranean railway line

In its heyday, which lasted until the outbreak of World War I, this little French town on the shores of the Lac du Bourget was stuffed fuller with aristocrats than any European Court.

The tiaras and footmen may now be gone but many of the spaces in which aristocratic heads craned to spot the latest fashion are still there – the Casino, the baths and the four-star hotels, now transformed into apartments.

If you love the Belle Epoque, if your heart skips a beat when you hear the words Art Nouveau or Art Deco, then loosen your velvet neck ribbon, straighten your cameo and take out your fan because Aix-les-Bains will make you swoon, even today.

With Queen Victoria in Aix-les-Bains

When Queen Victoria followed her daughter Beatrice’s advice and traveled to Aix-les-Bains for the first time in 1880, she was sealing the reputation of a thermal town with grandiose aspirations. Aix was already well-known beyond its borders but the Queen’s visits granted it the final seal of approval it needed to become the watering spot for Europe’s royalty.

A day in the life of Victoria’s Aix-les-Bains would have started with coffee at the Casino, followed by a treatment in the traditional baths, the thermes. The treatment would have involved some kind of bathing, massage, exfoliation – many of the treatments still available today.

After the baths would come lunch at one of the grand hotels, followed by the promenade, or stroll among one of the bandstands that dotted the Parc des Thermes or the lakeside.

With horse- or donkey-drawn carriages easily available, groups of curistes, or patients, might have gone on an excursion. The Queen on occasion would have visited the Grande Chartreuse monastery near Grenoble, for which she obtained personal permission from the Pope, since women weren’t allowed in back then. Or she might have traveled by horse carriage to the top of the Belvedere, one of her favorite rides, to enjoy the panoramic view and eat scones at La Chambotte. As the road narrowed, the Queen would have been carried the last stretch in a porter chair, of course.

Pastimes for wealthy visitors might have included golf (which made its first appearance in 1895), horse races at the hippodrome, shooting, sailing, clay pigeons, rowing, lawn tennis... there was never a dearth of things to do in Aix-les-Bains.

In the evening culture took over with a play or concert at the Casino Theater, a large red room (it used to be boring beige) still used today for cultural events. And if no performance was scheduled that night, there was – and still is – the Casino itself, which doctors once prescribed as a cure for melancholia. Sadness from losing too much, perhaps? 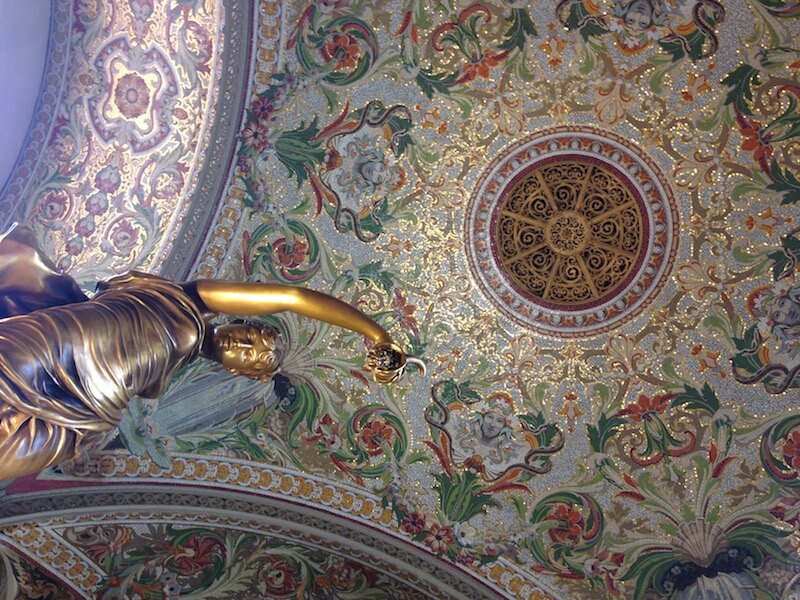 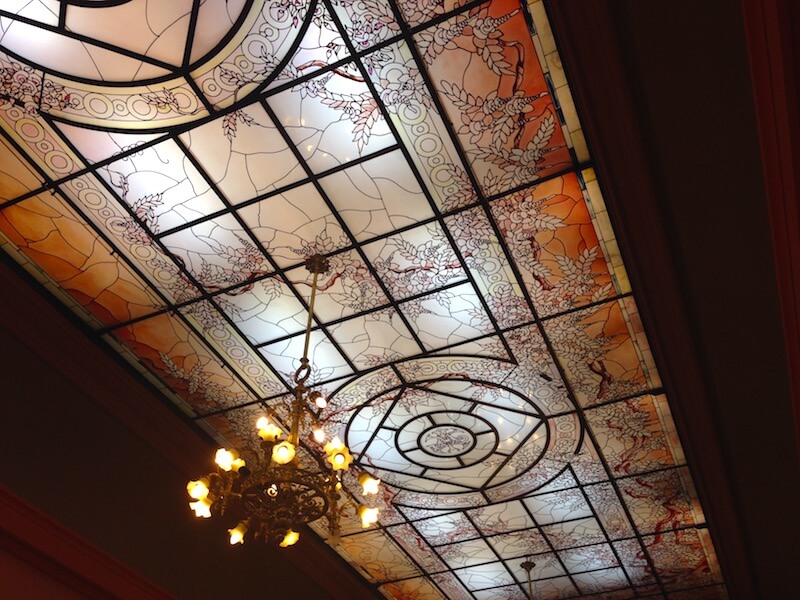 Details of the Casino's ceilings

In fact the Casino was so popular it became more a place to see and be seen than a gaming room. A petition was even circulated to ban women’s large hats so that prying eyes could scan the large room more easily.

Initially visitors would travel to Aix by horse carriage, stopping along the way to sleep in a relais-poste (postal inn) or auberge. Getting to Aix became much easier after the launch of the famous PLM (Paris-Lyon-Marseille) railway in the 1860s, which hustled thermal patients from Paris to Aix in a mere 10-17 hours by comfortable sleeping coach.

Upon arrival – as happens in much of the world today – touts would converge at the station and “suggest” hotels and rentals. The more astute touts would board the train several hours before it pulled in, ingratiating themselves with travelers and arriving in Aix with their accommodation deals signed, sealed and delivered.

Queen Victoria would have arrived in a special royal wagon and, as she disliked the heat, would have looked forward to her visits during the cooler spring season.

Queen that she was, Victoria didn’t actually use the baths herself but she received her treatments privately, enjoying them so much that she brought a masseuse from Aix back to London with her. She also, so the story goes, took home a beleaguered donkey called Jacquot who had been mistreated.

The Grand Hotels, the ‘palaces’

In French these sublime hotels are called palaces, three graceful sisters who sit regally side by side, perched high above the lake.

While some visitors rented apartments or maintained residences in Aix – as did Queen Victoria – many preferred to keep rooms at one of the luxury hotels.

The first hotel to populate the upper reaches of Aix-les-Bains was the Grand Hotel, famous for its glass-enclosed atrium, a feature often found in spa towns and which allowed everyone to watch social comings and goings.

It was in this atrium that Pierpont Morgan, the American financier, first heard of the Titanic’s sinking. He must have felt great relief: he had initially vacillated about whether to visit Aix or sail home on the ill-fated ship. 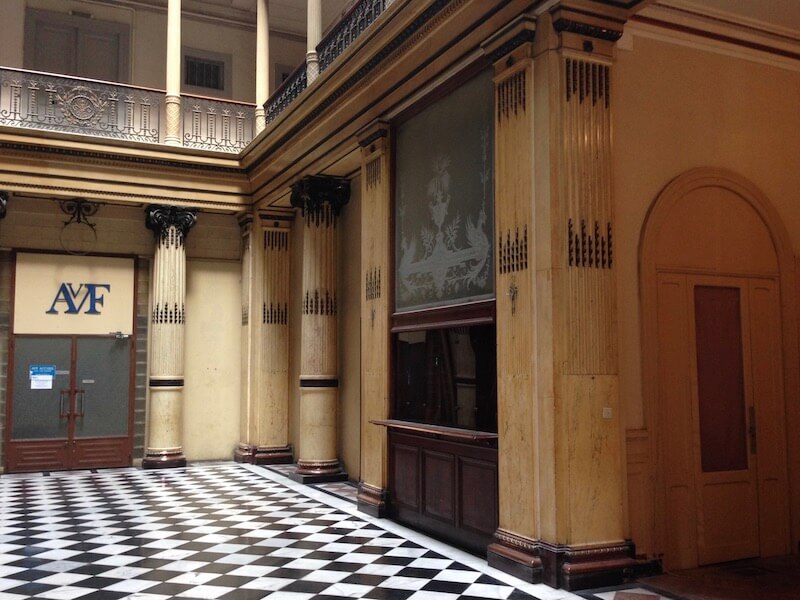 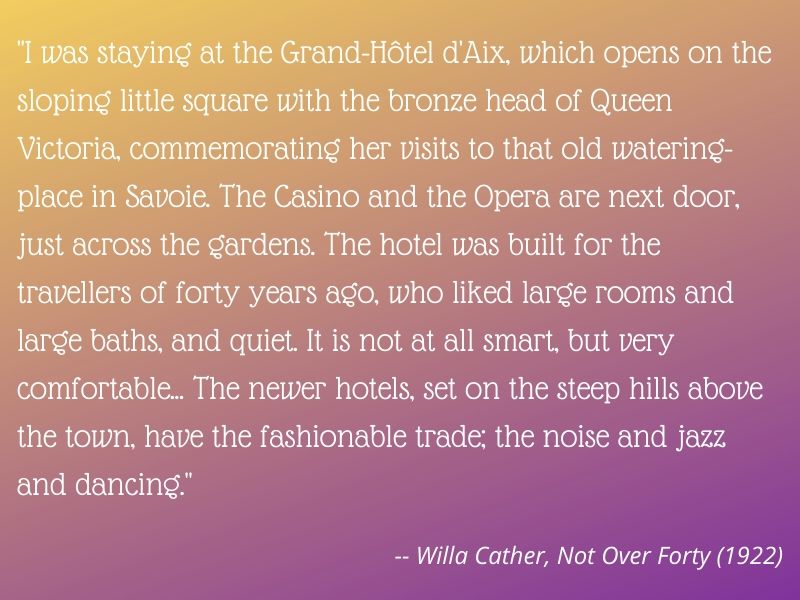 At its height Aix boasted three major palaces: the Royal, Splendide and Excelsior. These still stand but are undergoing varying degrees of restoration. Only now is protection of this extraordinary architecture being taken seriously and Aix, as did many cities during the second half of the 20th century, gave away much of its heritage to real estate promoters.

The success of Aix-les-Bains as a spa town continued well into the 20th century and an Art Nouveau and Art Deco building spree ensued. Many of these buildings still stand and while you won’t run into many billionaires or crowned heads, the Aix mystique remains.

The baths and spas of Aix-les-Bains

Wellness is in fashion today but there’s nothing new about it.

The first baths were built here in 125 B.C. by the Romans but for reasons unknown the waters were abandoned, to be rediscovered only during the 17th century. The first modern baths were built in 1779 by King Victor Amedeus III of Sardinia and soon, tourists would travel across Europe in such huge numbers to take the waters that an entire cult was created around the Aix ‘season’. 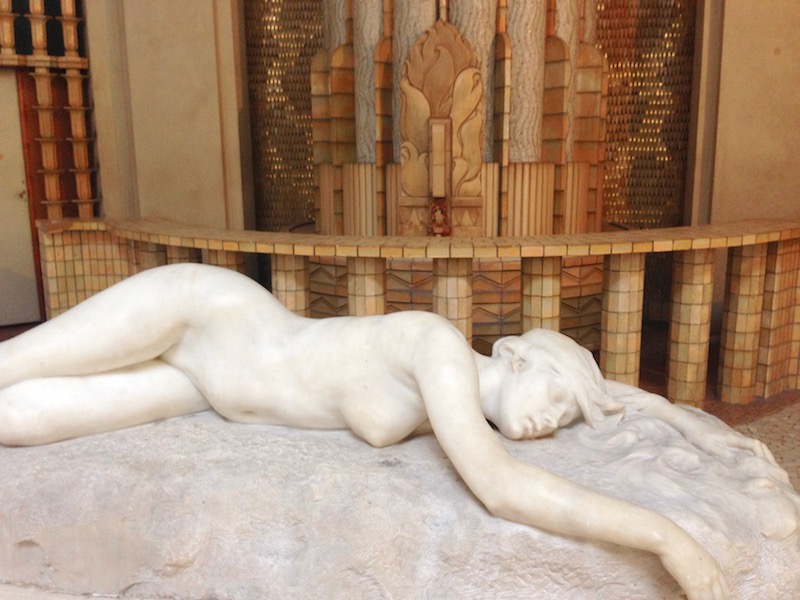 This is some of the original decor you can expect to see when you visit the old thermal baths.

Until World War II, thermalism, as it is called in France, was an elite pastime, reserved for the wealthy 10,000 or so visitors Aix received each year. But in 1939 France introduced social security, which paid for thermal treatments, and the spa experience was democratized.

The two populations coexisted, the Anglo-American contingent which preferred the cooler April-June season, and the social security-funded curistes overflowing in the town as of July.

Queen Victoria, always a leader, made sure royalty converged upon Aix-les-Bains at least a few weeks each year. Aix for its part has remained loyal to the Queen by celebrating Empire Day on her birthday, keeping her memory alive, and even erecting a bronze bust in 1924 to commemorate her visits to the town.

The many British citizens still living in Aix-les-Bains no doubt approve.

if you travel to aix-les-bains 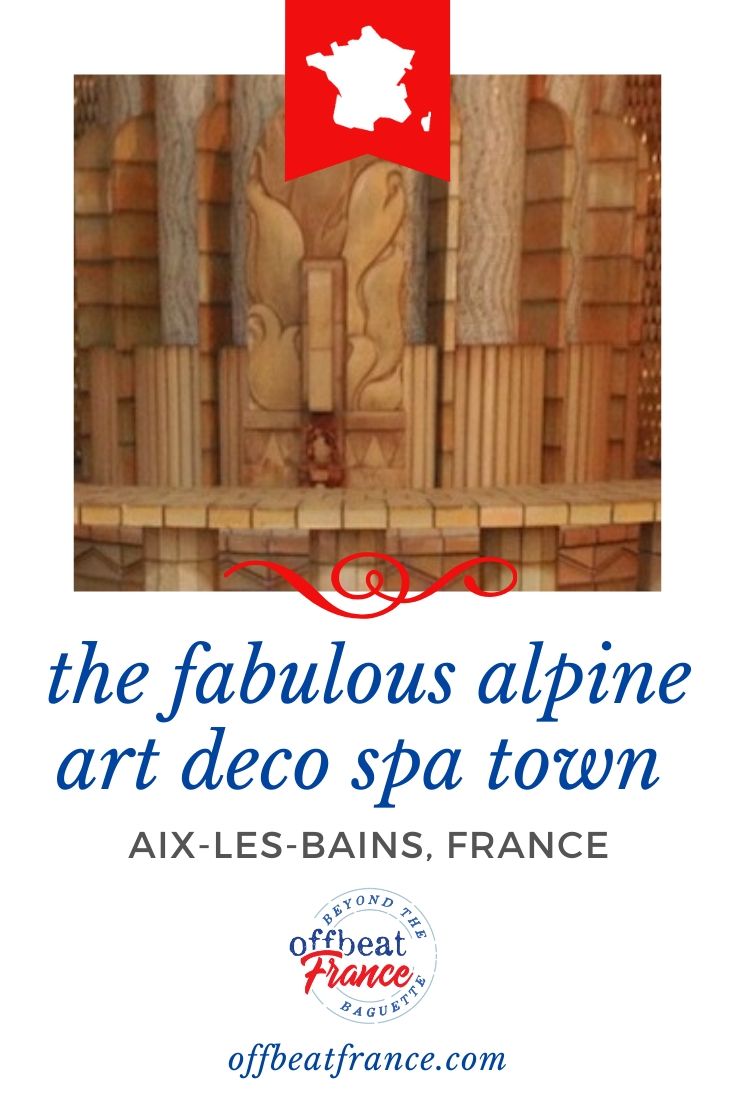 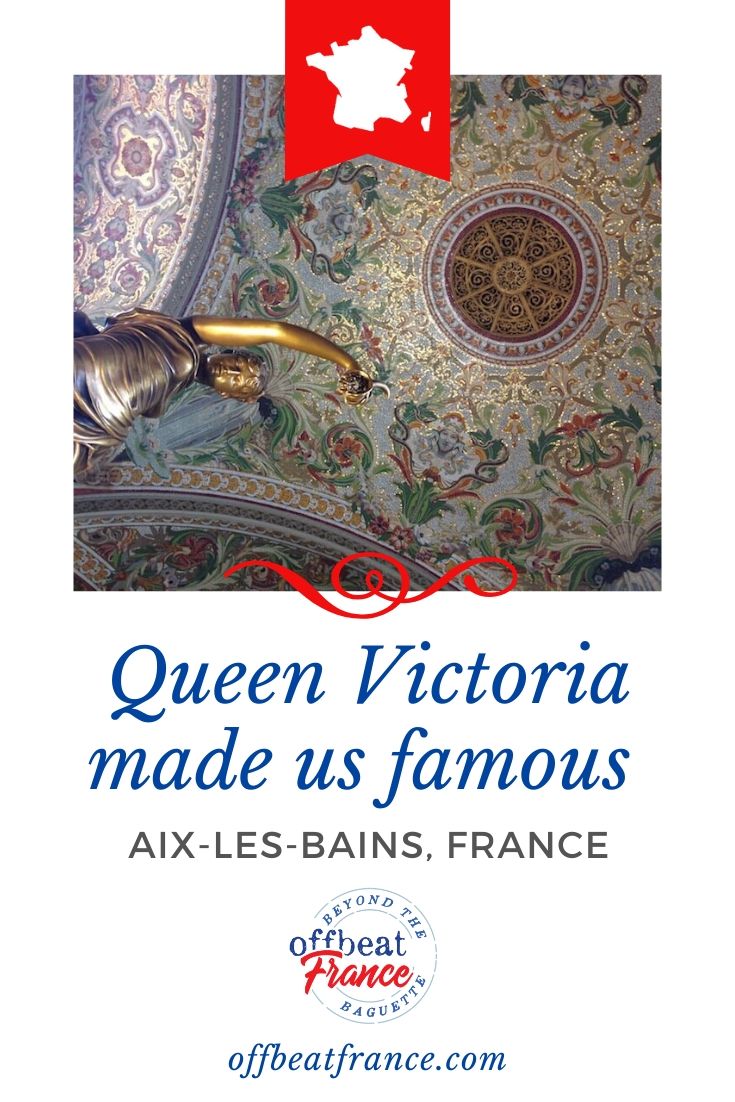 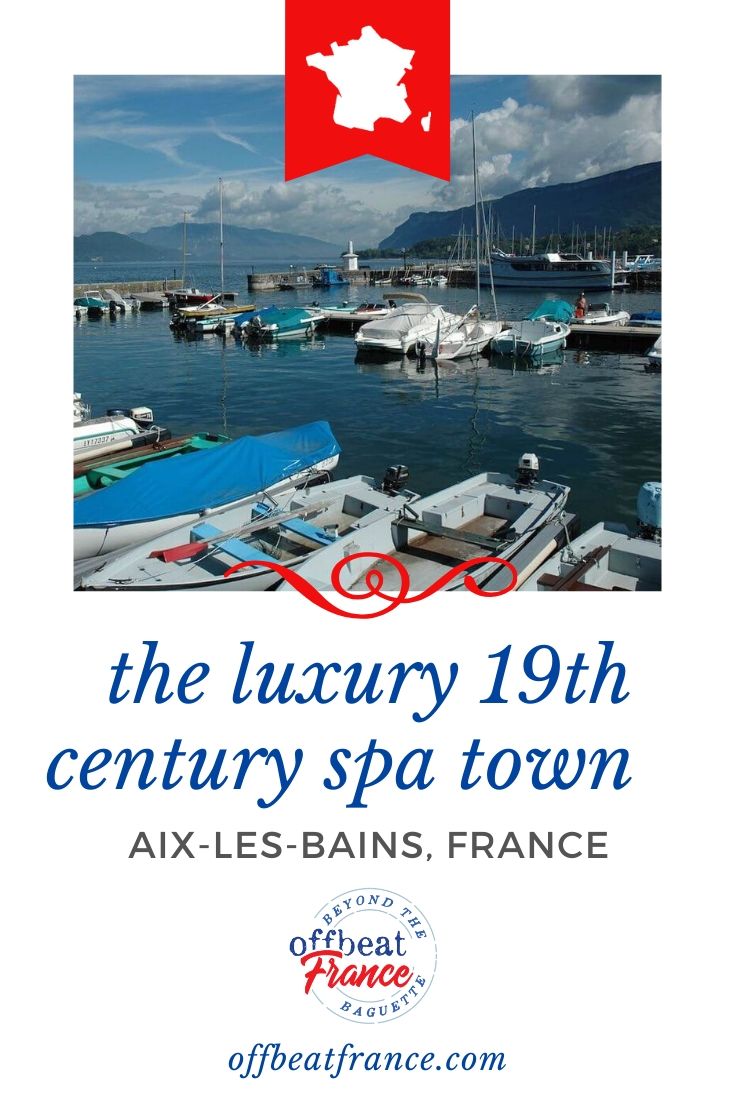