Tipping In France: What You Need To Know

You know that moment? The one that involves the silent battle you fight when deciding whether to tip? Well, tipping in France is no exception.

After a delicious meal at your favourite restaurant, french waiters will casually bring over the bill. What happens next, in some cases, can be anxiety-inducing, especially if you’ve become accustomed to the convenience of online food delivery.

But, the fine art of gratuities doesn’t have to keep you up at night. 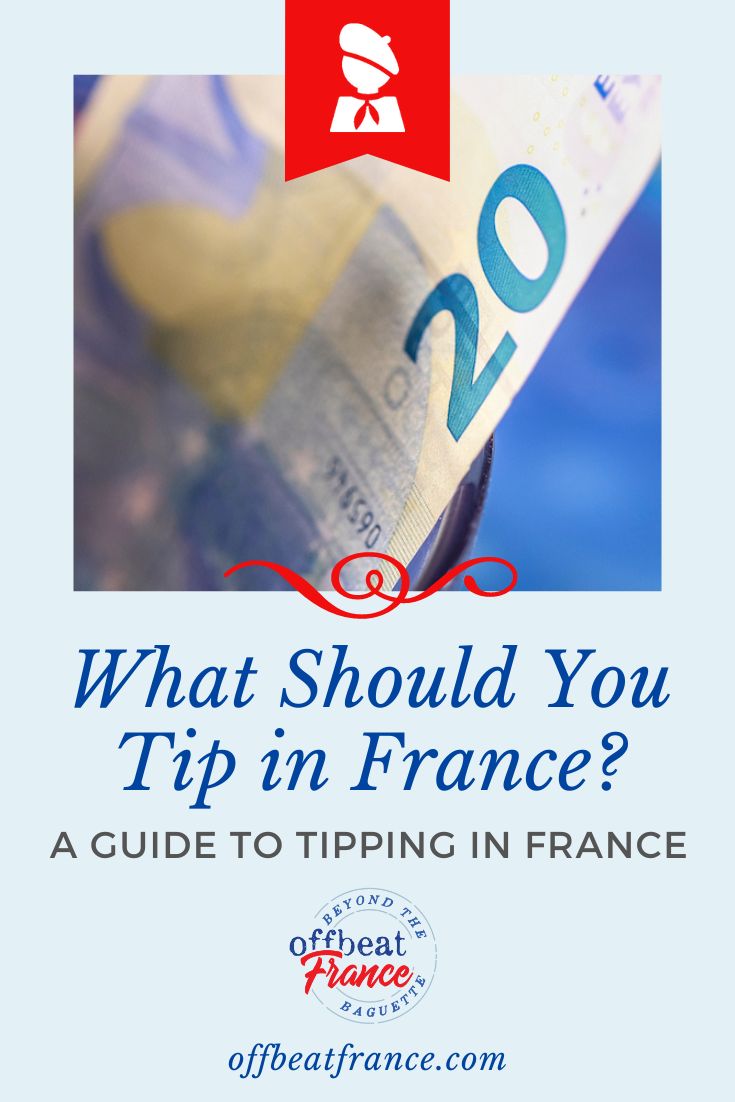 Once you learn the ins and outs of tipping, you’ll quickly realize tipping as you may know it is not one of those French stereotypes. With some traditions set in stone and others somewhere in the grey area, the lines between when and how to tip are clearly drawn in France.

So let’s find out precisely what tipping in France is all about.

So, do you tip in France or not?

The short answer is... it depends.

In general, it is not required to tip (some exceptions do exist), and overall there isn’t any expectation to do so. You see, in France, the amount you see on the bill is the exact price you need to pay — tip included.

Under French hospitality sector laws, all employees, such as waiters and bellhops, earn a monthly living wage, plus paid holidays and other benefits.

The Ministry of Economy says it clearly (on its French-language site): tipping is an option, not requirement.

In many other countries, for example the United States, those who work in the hospitality industry may depend on tips for their only source of income — this is not the case in France. Even so, if you've been served particularly well, leaving a tip is not uncommon.

Or, more importantly, how much to tip in France?

Now that you've decided you'll add a tip to the bill, you'll have to decide how. If you’re paying with a credit card, there is no extra line on the bill allowing you to insert an extra amount.

This means you’ll need to ask the server to add a bit extra, which they'll do when they enter the amount into the card machine. Some will accept this request and add in what you suggested (perhaps adding 5€ to a 45€ bill as a gratuity), but others may decline.

To make things easier, carry a bit of cash, including small change. Tipping servers in France in cash is usually the norm. 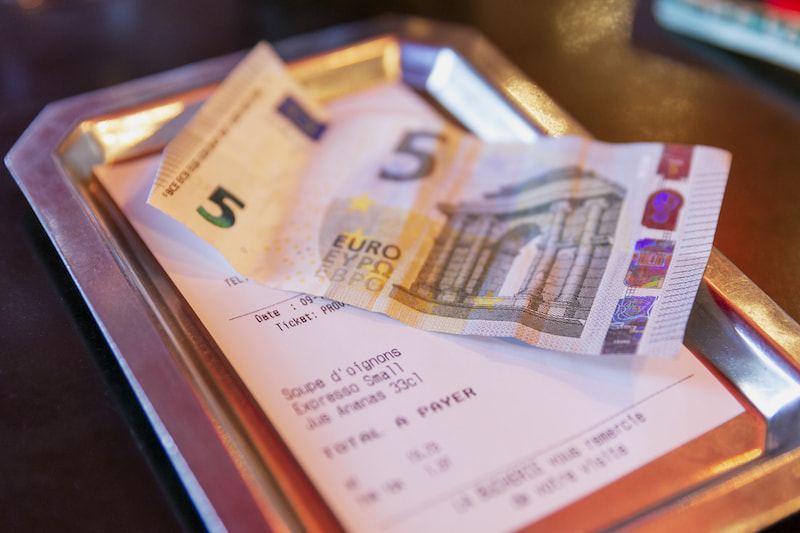 To tip in France: tipping etiquette 101

Yes, tipping is an act that involves some level of tact, not to mention understanding the etiquette that surrounds it.

Is it rude or not?

In France, leaving a tip swings both ways.

If you don't tip, that's fine – no one will think you're particularly rude. Pressuring you to leave a tip is exceedingly rare and I've only seen it happen in establishments that cater almost exclusively to tourists.

The alternative: can it be seen as rude to leave a tip? In some countries, it actually is insulting, but not in France. Feel like leaving a tip? Please do.

READ MORE: Are These France's Most Popular Foods? 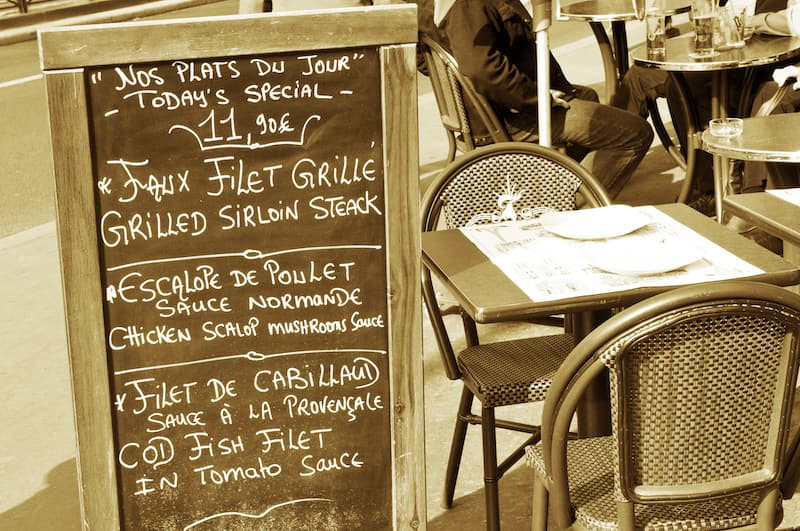 While it may not be expected, it is usually common to leave a tip at a café, bistro, bar, or restaurant. Just be aware that in restaurants, there is a tip already included in the bill, which you'll see as "15% service compris", or service charge. (You'll usually find this phrase just above the TVA, or value added tax.)

If you're truly more comfortable calculating a percentage of the bill, then 5% is ample.

Recap of tipping in France

But here's the good news: you won't go wrong, really. If you leave what you think is too little, relax: it won't be. Waiters and waitresses will be pleased with the tip.

In fact, leaving a massive tip may even be seen as presumptuous, or an act of showing off. French people don't like to talk about money, and a huge tip is just that, making money an issue.

Now, if you're eating in a Michelin starred restaurant with all the wine and trimmings, you can leave a larger tip, but please, only if the service was truly exceptional.

What is "tip" in French? Un POURBOIRE, pronounced poor-BWAHR.

Now, where exactly do you leave that tip?

Some place it discreetly under a saucer or plate, but it’s fine to leave it in the open as well. If your bill comes in a folder, possibly leather in some better establishments, open the folder, look at the bill, then deposit your cash or credit card in the folder with the top bit sticking out. This will signal to the waiter that you're ready to pay. When your credit card or change comes back, that's when you leave your tip, in cash, inside the folder.

A few more popular or family establishments, like La Boucherie chain of steakhouses, will ask you to pay when you leave. Check to see if they have a tip jar at the cash register; this is a pool for all staff to share equally.

The city is an international destination, so servers are more accustomed to foreigners who do not know the tipping culture.

In Paris, some servers might even tell you it’s necessary to leave a tip. This is a simple scam to get more money out of you. Flee the establishment and do not return: it's a tourist trap and there's every chance the quality of food will be as poor as the service.

Remember: only tip if you feel you want to.

Now, about those exceptions to the rule...

Hair and nail salons and hotel services do expect tips, so make sure you have a few coins for the bellhop who handles your luggage, the manicurist who buffs your nails or the assistant who washes your hair. I leave the assistant €1-€2, the stylist about €5, or even €10 if it's a major salon.

When it comes to room service, you could give the attendant a Euro or two when your meal arrives, but it's not obligatory. When you leave the hotel, please do leave something for the housekeeping staff – I tend to leave a couple of Euros per day of stay. Just leave the cash on the pillow or the night table when you leave.

If you’re visiting one of the many theaters in Paris or the rest of France, tipping the usher who shows you to your seat is expected. The same goes for tour guides, especially walking tours, and always when the walking tour is "free" – these are often run by students who live off the tips. 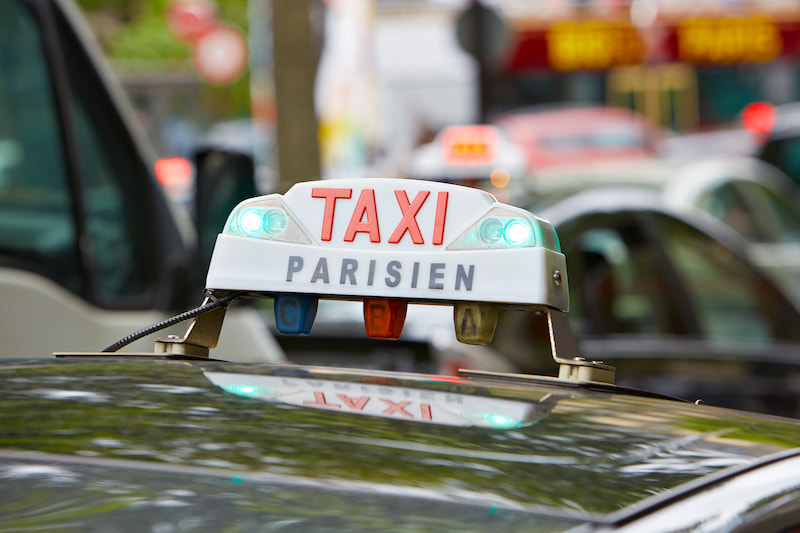 You should also tip your taxi driver a few Euros, even more if you've been caught in traffic or it's a particularly busy time of day.

Finally, keep an eye out for signs that state “pourboire interdit”. This means that tipping is forbidden. You won’t find these signs in many places, but if you do, stick to it and ignore the urge to leave a gratuity.

Final verdict on tipping in France

The good thing about tipping in France is that the rules are relatively clear: tipping isn't compulsory, nor is it even expected, but a small reasonable amount is always appreciated.

Always carry some cash to use for gratuity, but beware, as pickpockets in Paris (and other highly visited cities) know that most visitors tend to do this.

And remember, some French will take you and your tipping skills far. C’est pour vous (this is for you) is your safest bet for ensuring your tip is noticed and appreciated. Pronunciation? say-poor-VOO!