France Travel: the best ways To Get Around The Country

Not only is France the most visited country in the world, but it is also the largest country in Western Europe: getting around requires a bit of planning and forethought.

France has excellent public transportation, from efficient trains and buses to cheap rideshares. Choose the right transportation for France, travel across this beautiful country efficiently, and you can expect a visit you won't forget.

Let's have a look at all the pros and cons of each transportation method, from cost to total time spent travelling, all of it key information that will help you when planning a trip to France. 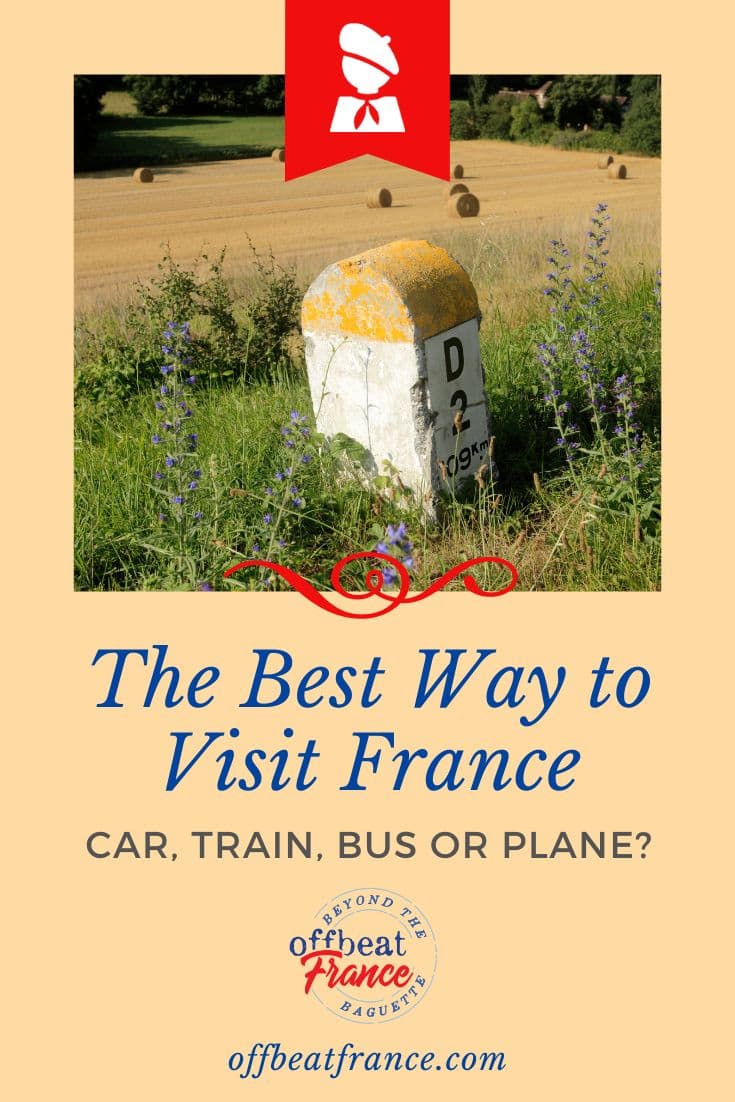 Within France, train travel is actually pleasurable, with a range of high-speed and local trains that serve many small towns and 231 cities across the country. It's certainly one of my favourite types of transportation in France.

Many train routes are unbelievably picturesque, weaving across mountains or along lakeshores through scenery you might not see otherwise. Taking the train in France is also efficient: there are good connections, trains are clean and modern (most, anyway) and the cost is reasonable.

If you're traveling from another European country, trains are among the easiest ways to travel to France, especially now, with the array of available European train passes.

Whether you intend to hop between the most beautiful cities in France or explore the more remote but gorgeous French villages, here are some essential tips for travelling by train. 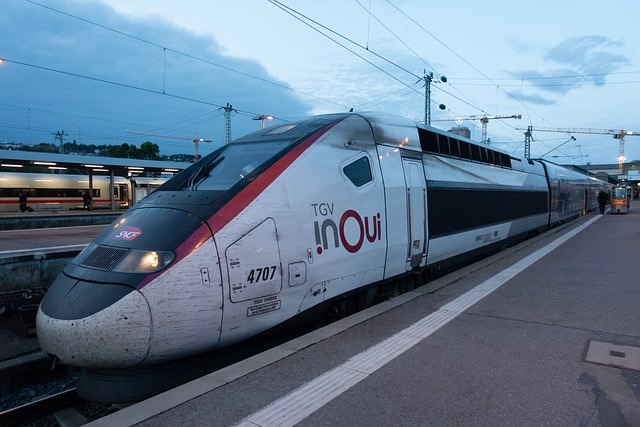 Getting around France by car

Travelling France by car is possibly the most expensive way to get around the country – but also the one that will get you to the most places.

Rental car prices went up after the Covid pandemic and haven't quite come down yet. Fuel is also increasingly expensive in the wake of Russia's invasion of Ukraine and the energy troubles that followed, although the government has tried to subsidize gas pump prices to some extent. Tolls, too, will add up quickly. The ViaMichelin online route planner is useful to calculate the costs of your tolls and gas.

Although this may be the most expensive option, it will also give you the most freedom. France's roads are also excellent, making it a pleasure to sit behind the wheel (as long as you avoid the holiday season traffic). 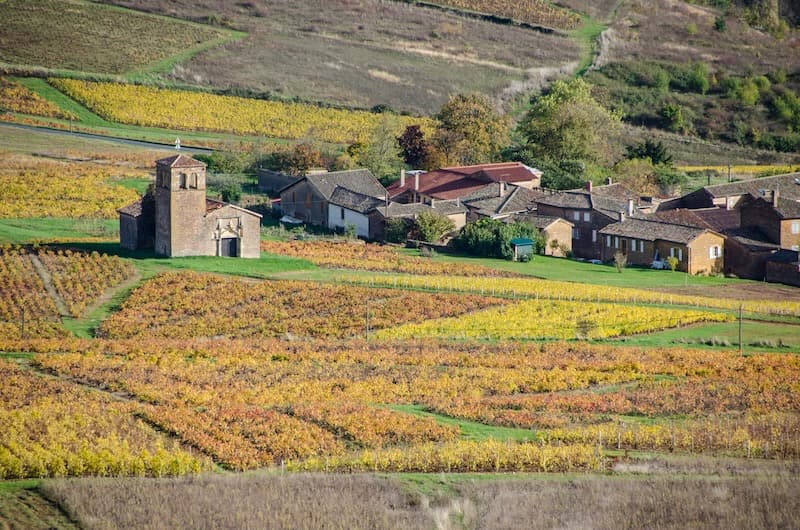 Tips for travelling by car in france

Consider this travel advice if you are planning on travelling across France by car:

Air travel, in my opinion, is probably the worst way to travel around France, with two exceptions.

The first: if you're traveling across the country, between the Alps and the Atlantic, flying makes sense. This is because we are a highly centralized country and "all roads lead to Paris", with few easy ways to get across the country without going through Paris.

Here's an example of what I mean.

Flying from Marseille to Paris may only take 1.5 hours, but you'll have to get to the airport, go through security, board half an hour early... then, at the other end, you have to deplane, claim your luggage, and make your way into Paris. All that can easily take 4-5 hours, and that's if nothing goes wrong.

The train, on the other hand, takes just over three hours, and you leave and arrive downtown. You can get on the train five minutes before it leaves, and at the other end you'll be out of the station and into town in no time.

The second exception of course is travel outside mainland France, whether to Corsica (unless you're taking your car on the ferry) or to the overseas territories, when flying is the only form of travel that makes any sense.

However, things change radically if you're trying to cross the country horizontally. Lyon to Bordeaux, for example, takes just over an hour by plane, and it's worth it, even if you have to deal with the airport mess and transport into town. But if you take the train, expect a seven-hour journey, and at least one train change, if not two. In some cases, you may have to head north all the way to Paris, and then have to head south again towards Bordeaux. I live near Lyon, and when I go to Bordeaux, I fly.

That said, France has 34 airports suited for international travel, so you can access most of the main tourist destinations by plane.

Flying within France can be incredibly cheap if you use discount airlines and book well ahead of time, often far cheaper than the train. But you'll have to factor transport to and from the airport, which sometimes costs as much as the flight itself. 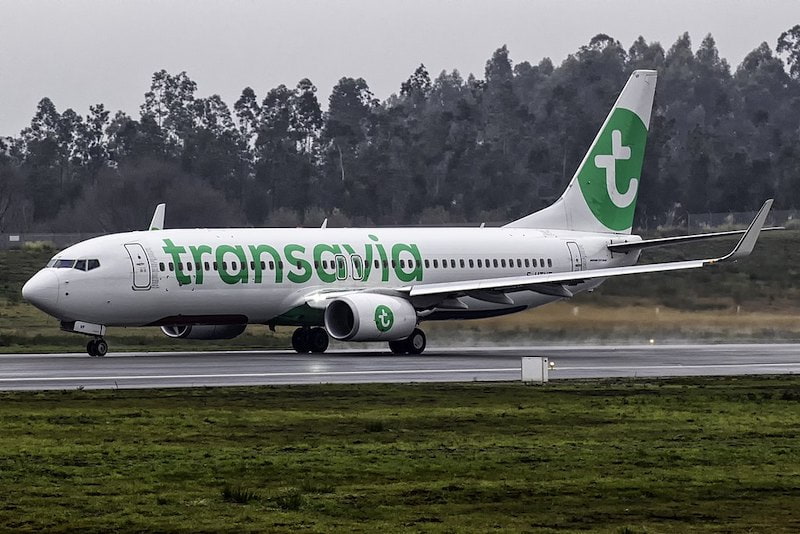 France has a number of discount airlines that ply national and international routes. Photo by Bene Riobó, CC BY-SA 4.0 via Wikimedia Commons

Tips on plane travel in france

Here are some essential things to consider when flying in France:

If you want to travel to more off-the-beaten-path regions, you may have to take the bus. Most regions are served by trains − but not all.

If you've ascertained there is no train where you're going, check the bus schedules. They take longer than the train, but they also go further, and travel at odd hours when trains might not be running.

For example, the mostly rural Ardèche region in central France has virtually no trains, so all transport between towns takes place on buses.

All bus companies can travel any route, so there is quite a lot of competition, which means plenty of choice and low prices. 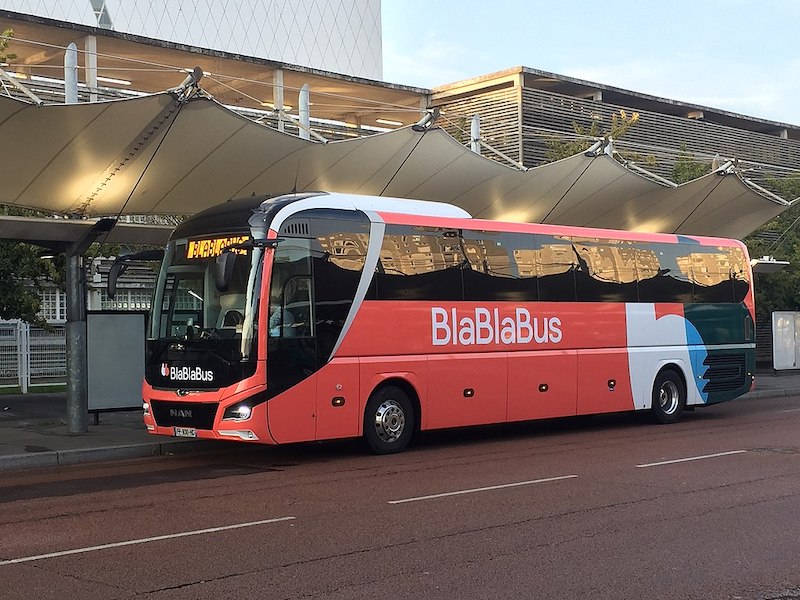 A number of bus companies crisscross France - BlaBlaBus and Flixbus are among the largest; via Wikimedia Commons

Tips for bus travel in france

Here are a few tips and information to help you enjoy those bus trips across France:

When planes and trains are full, which often happens around school holiday periods, rideshares become popular (in fact, they're gaining popularity in France).

Think of it as taking a taxi but splitting the fare with another passenger.

The problem is finding someone going to your exact destination at the time and on the day you want, but this is relatively easier on the more frequented routes.

Ridesharing gives you a fantastic opportunity to get to know new people during your trip and find out about your destination if your driver happens to be a local.

Here are some essential tips to consider for ridesharing in France:

At the time of writing this, France has survived its seventh Covid wave and all France travel restrictions from the US were removed.

The French government no longer requires us to wear masks during travel in France, although in crowded places and on public transport it is recommended. Nor do you have to present a negative Covid test when travelling to France from a foreign country, and vaccine passes are no longer required.

We still hear questions about France travel concerning Covid, and restrictions can change with each wave so please do be sure to stay up to date with all France Covid travel restrictions before you plan your next trip here.