why do the french celebrate bastille day on the 14th of July?

Which July the 14th are we talking about?

If you happen to be in France in mid-summer, you'll notice the gradual emergence of French flags wherever you go. It will start with military statues on village squares, then spread to the town halls, and eventually the "bleu-blanc-rouge" will appear on people's balconies.

This is the one time of year where being openly patriotic is not necessarily a political sign but a reminder that France has plenty to celebrate.

The 14th of July is our national French day, when we commemorate the storming of the Bastille medieval fortress by the good citizens of Paris, launching the French Revolution and eliminating those pesky Bourbon monarchs.

At least, that's what we are led to think in school.

The Bastille was indeed stormed on the 14 of July, but there’s a lot more to the story.

To add mud to the waters, France didn't even decide to make July 14 Bastille Day until a full century after the events.

So yes, 14 July is France’s national holiday, but not just because of the Bastille.

Celebrating Bastille Day: but WHICH 14th of July?

What is the difference between the two July 14s, you ask?

And why were we not told this, as children? Why were we fed the wrong story about our most important holiday? Perhaps our little minds were too fragile to understand?

So let's go back to 1789, when crops failed, taxes weighed heavily on the poorest and unemployment was at an all-time high (while Versailles danced, of course).

Louis XVI (Marie-Antoinette's husband) called in the États Généraux, or Estates General, a sort of lopsided Parliament in which representatives of three groups — nobility, clergy and commoners — shared power. It sounds grander than it was, because the king could dismiss it on a whim so it had little real power. 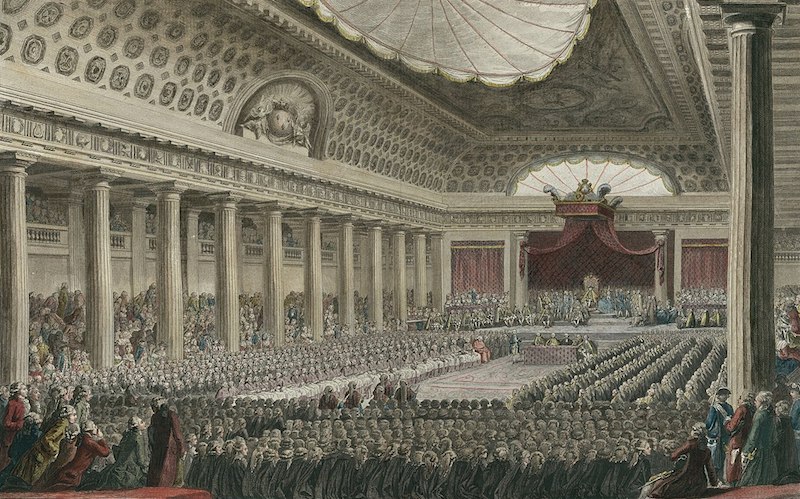 But things deteriorated quickly. Without getting mired down in detail, just know that the commoners took over and swore to give France a constitution. The king called in a bunch of foreign mercenaries, the popular minister of finance was dismissed, and skirmishes broke out between citizens and some of the foreign troops, whom Parisians thought had been brought in to arrest their representatives.

What a mess! Parisians were angry.

So they set out to look for weapons, as one does. The city's gunpowder was stored at the Bastille, so that's where they headed. Plus, they would be able to free the prisoners held there by the hated authorities. 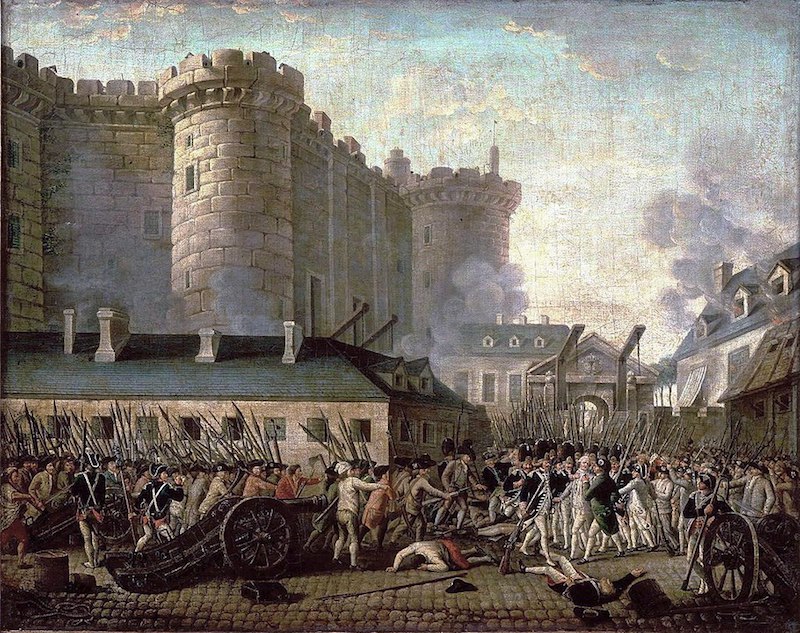 The Storming of the Bastille, by the neo-classical painter Jean-Pierre Houël

As a little aside, I should mention that this is one example of history hanging by a thread: gunpowder was useless without weapons; the Bastille was found nearly empty and there was no one to liberate; the king had in any case planned to raze it and replace it with a majestic square (named after himself, of course); and soldiers defending the Bastille refused to use their well-loaded canons against the mob, which made their takeover a lot easier.

Things could so easily have gone differently...

A year later, representatives from across the nation tried to heal their wounds in a grand reconciliation and swore allegiance to the nation, the constitution and even the king (he would still be around for another three years before losing his head in 1793).

France was having a feel-good moment and chose July 14th to celebrate its newfound unity.

In the end, this grand reconciliation would last less than a year. The royal family, feeling much under threat, would attempt to escape (unsuccessfully), and France would move one step closer to an era of terror that would last months and during which tens of thousands would be executed.

How Bastille Day and Federation Day came together

When a century later (in 1880) the government finally passed a law choosing July 14th as France's one and only national holiday, nowhere were the Bastille or the Federation (symbol of the so-called reconciliation) even mentioned!

In the end, 14 July was chosen as France's national day only because it was the only date the Senate, which was debating such things, could agree upon.

"Let us remember that the 14th of July 1789 that saw the taking of the Bastille, was followed by another 14th of July, which consecrated the previous one through support of France as a whole... This second 14th of July, which shed not a drop of blood or a single tear, is the day of the Great Federation, which we hope no one will refuse to join. In this way we will renew it and perpetuate it, like the symbol of the fraternal union of all the parties of France and of all the citizens of France in freedom and equality." Or something along these lines.

Oh no we haven't!

Celebrations were indeed held in the early days, but in 1799 began dropping off. Here's what that timeline looked like:

If the 14th of July in France was finally agreed during those hectic Senate discussions of 1880, it's because of its dual symbolism: the date speaks to everyone, from revolutionaries to royalists. And frankly, who cares which year it refers to?

Either way, though, it's a party.

Traditions of Bastille Day: how we celebrate our French National Day

Certain things are inevitably part of July 14 Bastille Day traditions in France: without them, the date would simply be a pale mirror of history.

But we are French and so we must celebrate, as with everything, in style.

The main Bastille Day event across France is always the fireworks display, from Paris to the provinces and in every major city in-between. And every minor one. And every village. And even some back yards.

To many, this is a sign of rejoicing. To me, it is a dreaded evening of war-like noise, a burning smell and seriously whimpering dogs trying to squeeze their bulks under my low furniture.

That said, the use of fireworks to celebrate this day is a little odd — while Bastille Day is somewhat a celebration of revolutionary fervour, fireworks are one of the few things left over from the French monarchy. Louis XIV loved fireworks and used them on every possible occasion, from weddings to baptisms, and they were regularly launched at court for the enjoyment of the realm's Most Important People.

As you might expect, the biggest and best firework displays take place in Paris, where each year brings in a new theme and the Eiffel Tower, if this is even possible, becomes ever more dazzling. (If I dare watch the festivities on television, I have to use headphones and avoid my dogs' suspicious gazes and incessant whimpering.)

Below you'll find the amazing 2021 display!

This is also an institution and nowhere is Bastille Day history more evident.

The largest Bastille Day parade is, of course, in Paris, with representatives from each different military corps marching down the Champs-Elysées. The crowds are huge, and the President of France is present, along with every possible important politician who values his or her future career. 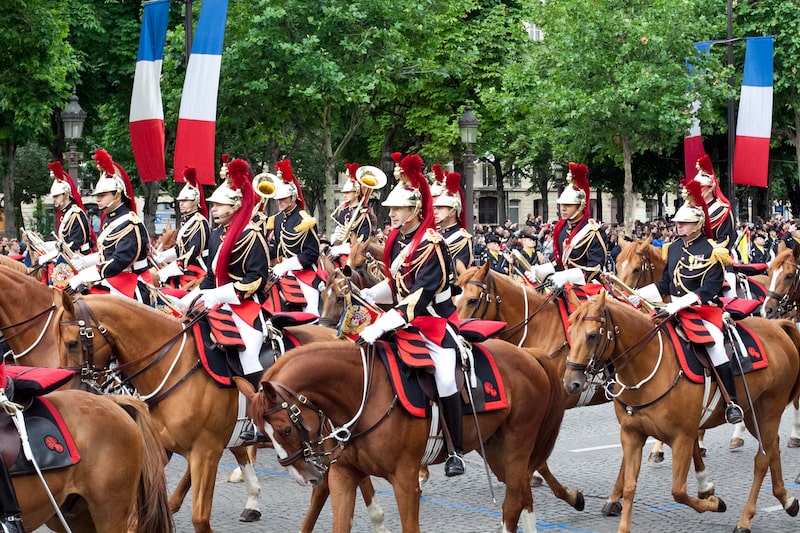 The best French parade: along the Champs-Elysees on Bastille Day

Throughout France, smaller parades take place, but I haven't seen any that begin to equal the pomp and circumstance of that of Paris on Bastille Day.

The 1880 parade, like the fireworks, started off as an educational tool of sorts, mostly to show the French (and the world) that although we had lost the Franco-Prussian War a decade earlier, we were back on our feet, armed, equipped, and ready to fight again.

In 2020, the coronavirus epidemic made for a scaled down ceremony at the Place de la Concorde, with strict social distancing rules and by invitation only. However disappointing, it would have been impossible to hold a larger parade safely, not only for spectators but also for the military personnel who have to spend up to two full weeks together in rehearsals before the main event.

Still, the jets flew, the fireworks soared, and everyone sang, after an emotional ceremony honouring the country's health care workers.

And by 2021, things were almost back to normal.

Village parties and a patriotic moment

Paris may be the queen of the parade but when it comes to actual celebration, no one does it better than a small town or village.

I have spent many a (pre-dog) 14 Juillet, as we call it here, on a village square, bedecked for the occasion, treating my ears to a local disco band tuning its instruments. Few French towns are quiet on this day: there are street fairs, bake-offs, bandstands and bands, speeches by mayors, dances for all ages, with tables heaving with food and quite a few tipsy revellers having fun well before the festivities even start.

If they're not on the village square, extended families gather in sun-drenched parks or on the beach with their relatives for an elaborate picnic, or a meal at home or in a restaurant. In the past, a typical menu might have included heavy meats and dorioles, a rich pastry. These days, anything goes and with the crushing summer heat, the lighter the better.

It is also perhaps the one time a year I get to sing La Marseillaise, our national anthem... (if you're curious about it, here's a video with the tune, but the lyrics are, of course, in French).

The 2020 festivities were cancelled in many small towns, including mine, and while I had prepared my dogs for the inevitable sound of rural village fireworks, they were, for once, able to relax. By 2021, they were back in full force.

Don't laugh, but this is another tradition Bastille Day is known for. Traffic.

The Fête Nationale is the perfect excuse for a long weekend, often combined with summer holidays. The previous weekend is usually labelled ‘black’, a dangerous driving day during which everyone is enjoined, even begged to stay off the roads.

No one listens: it’s a holiday, after all, so the police is out in full force, radars overheat, and for once French drivers stick (more or less) to the speed limit, not because they want to, but because it's too crowded to speed.

It is not a good day to be driving. (If you must drive, here are some French driving tips to see you through not only Bastille Day but the rest of the year as well.)

If we had a French Independence Day, this would be IT. But since we were never fully colonized, the Bastille Day party will have to do.

And where we happen to be doesn't matter. The French celebrate Bastille Day everywhere, from Canada to Australia to the South Pole.

It just reminds us of who we are. 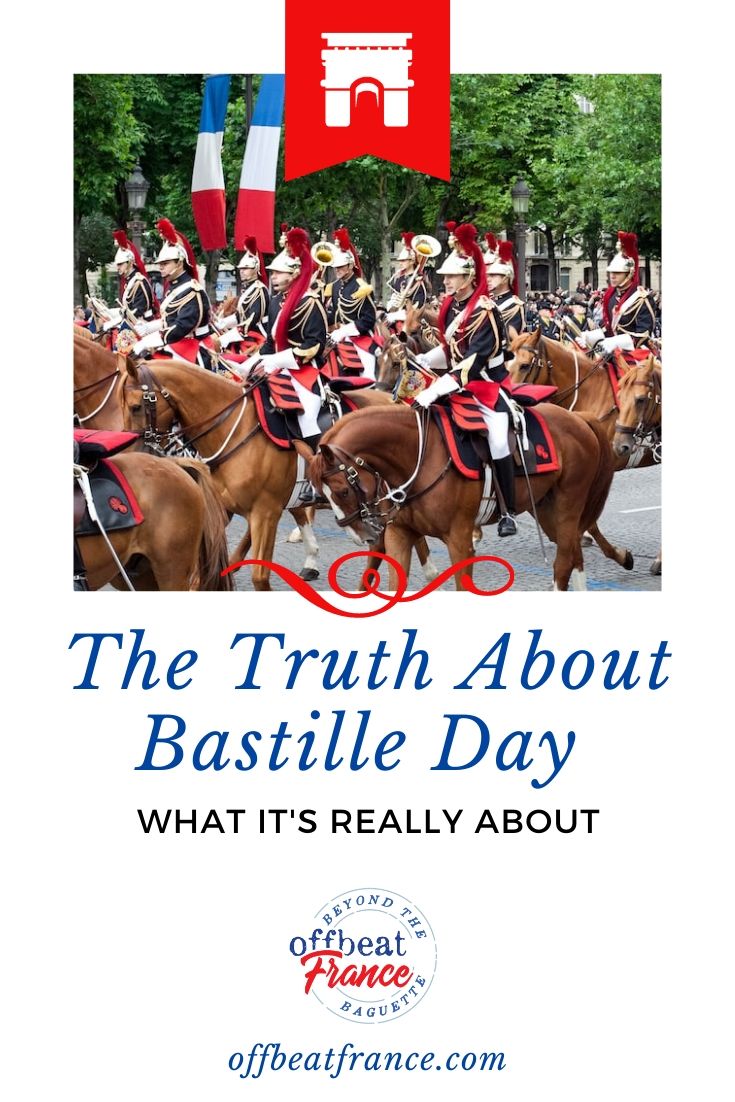 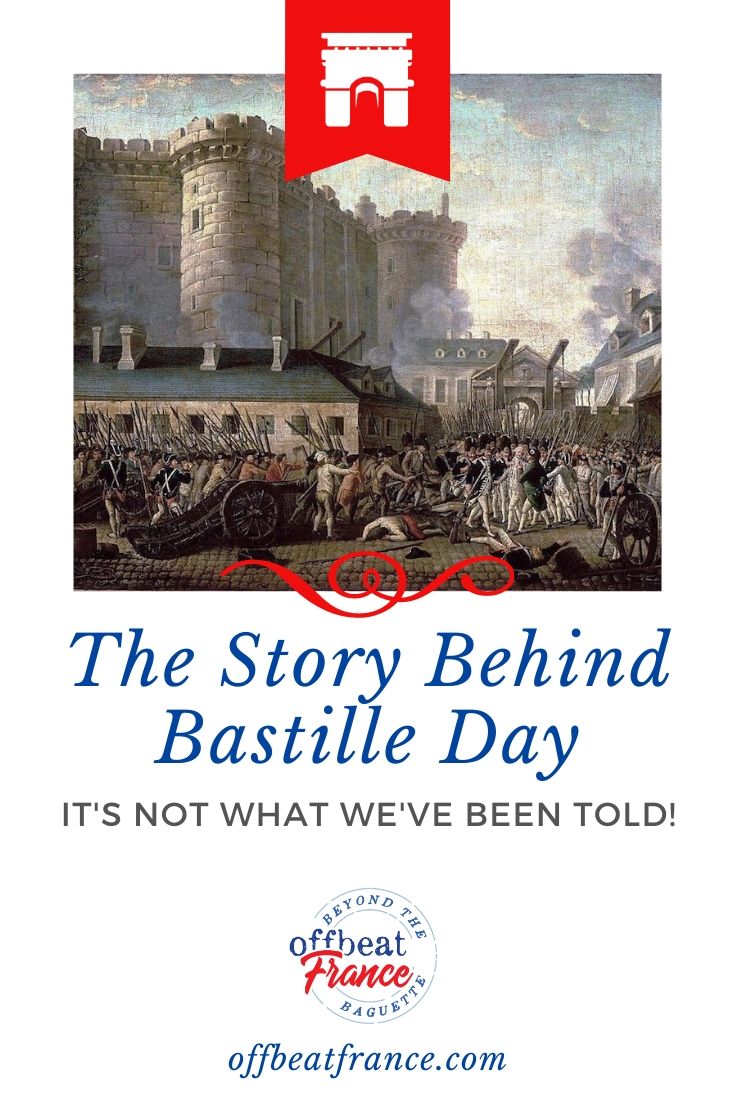 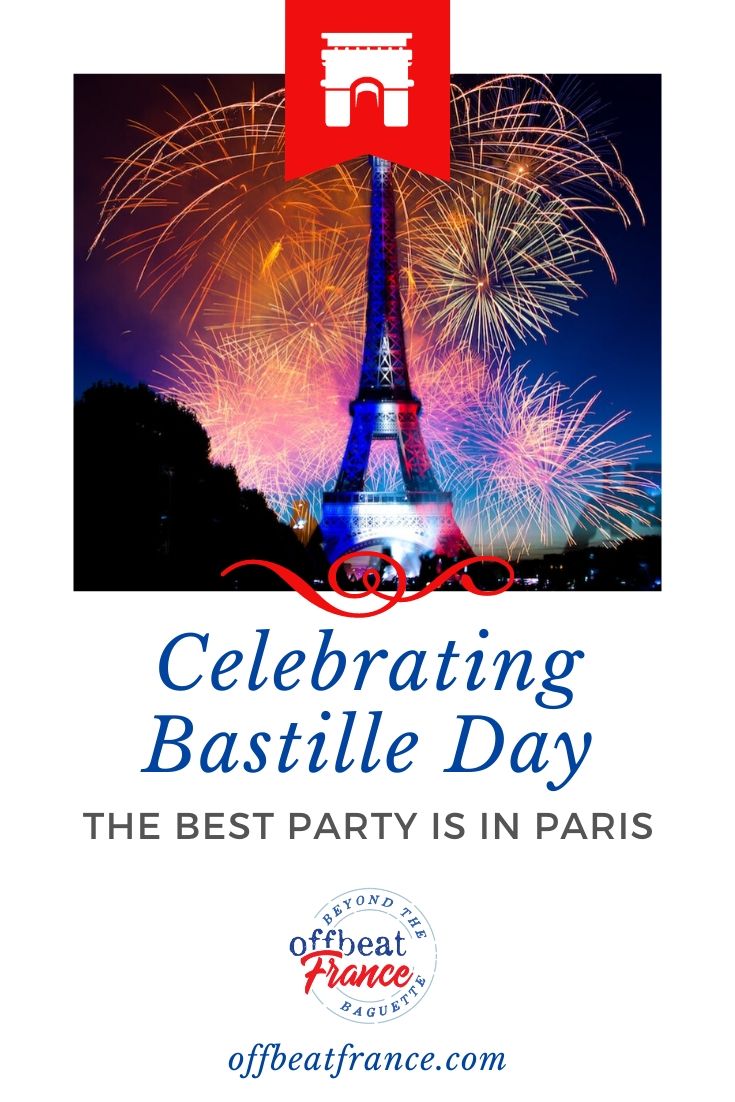