Is Avignon Bridge the most famous bridge in france?

The story of Avignon Bridge, or the Pont d'Avignon, is not the one you might think. We'll look at how the song came about and explore the legends and stories behind the fabled bridge.

History of the Pont d'Avignon

How to photograph Avignon Bridge

Listen to the song

Every French child knows the Avignon Bridge song, as do many children around the world who have nothing to do with France.

But should they study ever French at school, this is probably the first song they'll learn. (Or maybe the second, after Frère Jacques.)

There's no question the bridge is famous, but do you know everything about it? 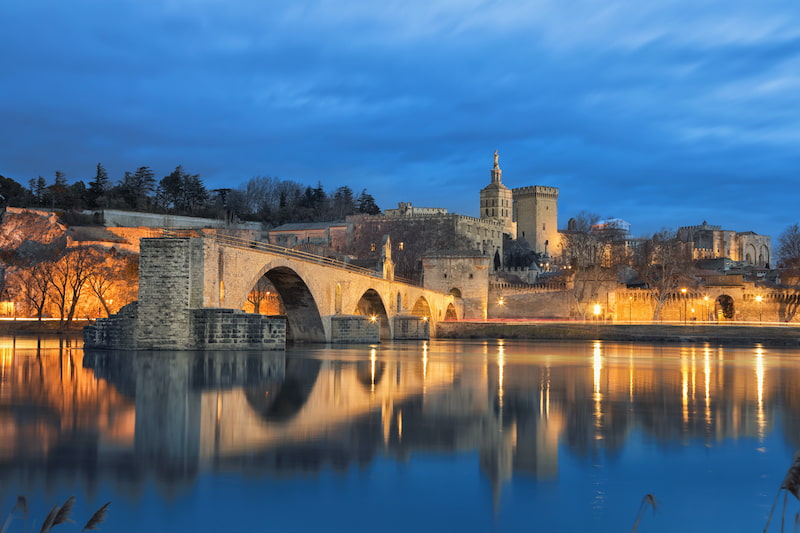 Even today, people come to Avignon to dance on the bridge.

A song about the bridge has existed since the 15th century, although the version we know today is far more recent.

In the mid-19th century, on weekends, people would come to Barthelasse Island for picnics and dancing under the bridge, which is probably how the words to the song developed.

WORDS OF THE SONG IN FRENCH

WHAT THE SONG SAYS ENGLISH

On Avignon Bridge, We dance, We dance, We all go round and round
The beautiful ladies do this, and then do that.
(Instead of "do this, do that", it could also mean "lean this way, and then that way")

History of the Pont d'Avignon

How old is the bridge?

There has been much debate as to whether an earlier bridge was built by the Romans.

On the one hand, large blocks appeared beneath the existing piers when waters were low – these blocks may have been Roman in construction and their existence has been reconfirmed several times. Also, the original bridge was covered in wood and at least one carbon dating analysis concluded the wood was from the late Roman era.

On the negative side, no major settlement was ever built during Roman times across from Avignon, hinting that there might have been no bridge. If there had been a bridge, where would it have led? At the time, the main road from east to west avoided Avignon altogether, crossing further south where the river was less violent. Had there been a bridge at Avignon, surely it would have become a principal crossing.

No matter. By the time the present bridge was built in 1177, it was considered a marvel of engineering, its 22 arches taking eight years to complete.

Before the bridge, anyone wanting to cross the Rhône had to row – not an easy voyage across a turbulent river. So the bridge was considered important: it was at the time the only link between Lyon and the sea.

This would increase Avignon's importance and the city would eventually become a major pilgrimage stop on the route between Italy and Spain, growing from the toll revenues it collected. Its increased wealth was probably a factor in the decision of the French popes to relocate the headquarters of the Catholic Church here during the 14th century.

In fact, at the time of the Papacy, Avignon was becoming overcrowded and dirty and many cardinals and senior church officials moved across the river to Villeneuve-lès-Avignon. They needed the bridge to get back and forth to the Papal Palace.

Avignon Bridge would eventually succumb to that most obvious of handicaps: nature.

The Rhône is known for its speed and strength, and there are plenty of medieval reports of floods ripping through Avignon, sometimes even shattering its ramparts.

Each time the waters rose abnormally, parts of the bridge risked being washed out.

Take September 1226. King Louis VIII of France had been laying siege to Avignon for three months until, finally, Avignon surrendered and the king destroyed most of the bridge. A few days later, the Rhône overran its banks, flooding the city. Had the Avignonais waited a few more days, the king's troops might have been wiped out... but those are the quirks of history.

The bridge was quickly rebuilt, a cycle of destruction and reconstruction that would characterize its history for centuries to come. When unseasonably cold weather struck, the ice melt would contribute to flooding, weakening piles that were already built on unstagle ground.

In November 1544, heavy rains broke Avignon's walls, even washing away bodies in the cemetery and forcing everyone in the neighboring countryside to travel by boat.

In 1603, an arch crumbled, and another four in 1605. Repairs finally began in 1628, only to be interrupted by a plague. It would take until 1633 for the bridge to become passable again – but no sooner did it reopen than two more arches fell.

This back and forth went on until 1668, when authorities finally decided it was too expensive to maintain and gave up rebuilding it. 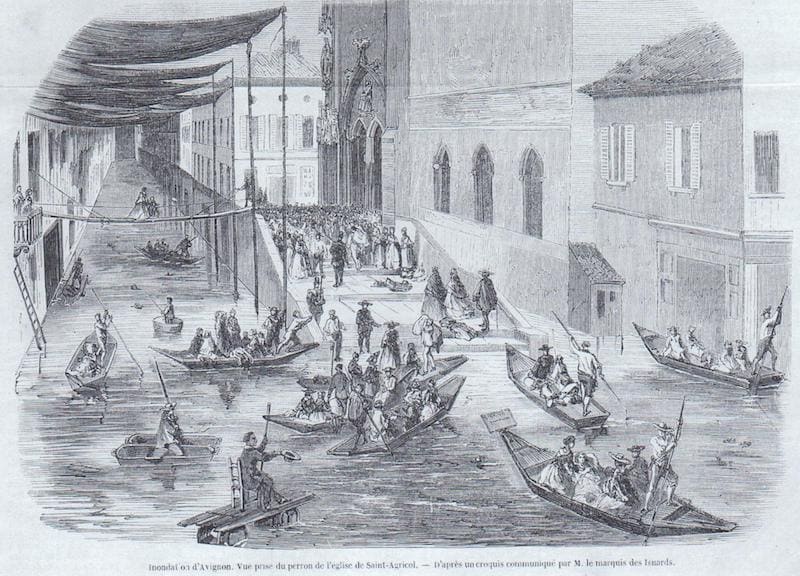 France suffered tremendous floods in May 1856, when the Rhône and its tributaries overflowed, from Lyon all the way to Arles

This is France, so of course there's a legend behind the bridge.

It all began with the arrival in Avignon in 1177 of Bénezet, a shepherd from the Ardèche or the Vivarais (there are conflicting reports). At the age of 12, he heard a divine calling to stop being a shepherd and "go build a bridge at Avignon".

So off he went.

Once in Avignon, he headed straight for the main square (which today is the site of the Papal Palace) and announced his plans, which locals greeted with much mockery and laughter.

Avignon's bishop reported this to the authorities, which then asked Bénezet to prove what he was saying. Bénezet then picked up a rock "that 30 men could not have moved" and, with the help of angels, threw it into the river like a feather. Of course this was considered a miracle, and so the bridge's foundations were laid.

Again, according to legend, Bénezet started a charity to finish building the bridge and to maintain it, but he would die in 1184, just before the bridge was completed.

Saint Bénezet, by the way, was not officially a saint... he's just been known as one since that first rock hit the river's waters.

How to photograph Avignon Bridge

This is tricky. When you visit the bridge, you're walking ON it, but you won't be able to see its four graceful arches. For that you'll need to take some distance.

Here are some spots to capture that perfect photo:

Also note that visiting the bridge is not free, but the entrance fee is included in the Avignon City Pass, which I found to be good value.

If you only want to photograph the bridge's arches, then don't bother paying the entrance fee to go on top. Instead, look at it from the various points mentioned above.

The bridge itself is a short walk, four arches' worth, with a railing at the end. Halfway across, you'll find two small chapels that remain from the past, a little incongruous in the middle of a bridge, but welcome.

The chapels are built one above the other.

The lower chapel, or Saint-Bénézet, was built when the bridge was lower and was designed to hold the relics of its namesake, Saint Bénézet. These relics would be moved during the 17th century to the Celestine convent and a century later to Saint-Didier church, where part of them remain today (the remainder are in the Cathédrale des Doms).

During one of the post-flood rebuilds, height was added to the bridge in the hopes of avoiding further destruction. An upper chapel, Saint Nicolas, was then added and contained the relics of Saint Benezet, which were removed in 1674 when, again, the bridge was threatened. 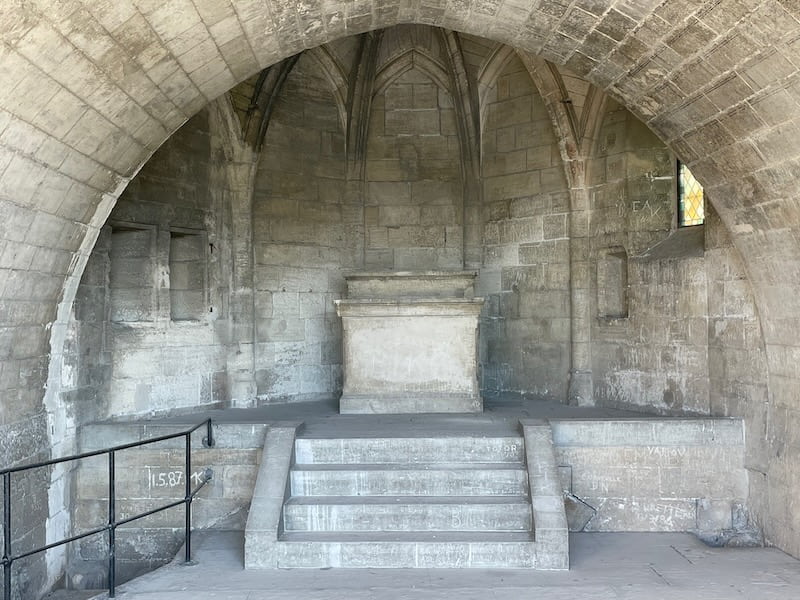 The older, Saint-Bénézet chapel, built on the original, lower level of the bridge 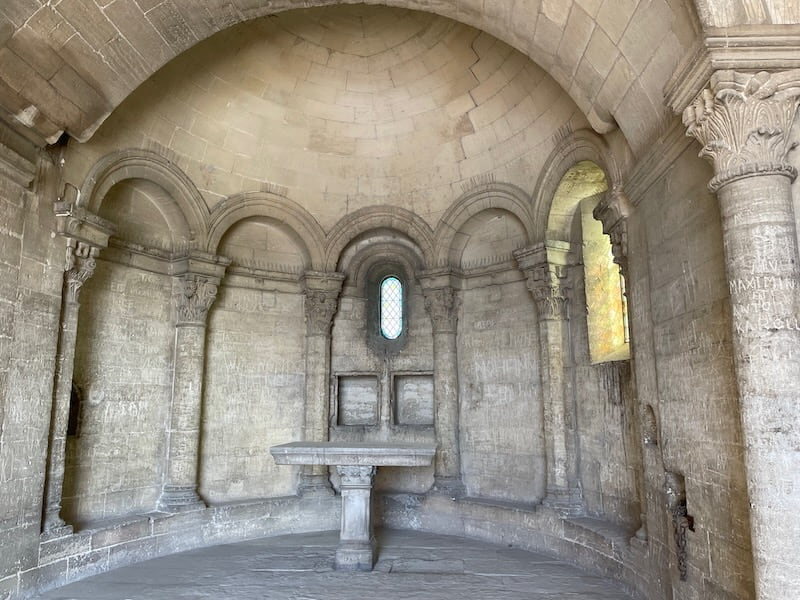 The newer, more gothic Saint Nicolas chapel, built above the old one (there are steps that connect the two)

I enjoyed my bridge visit (despite the howling wind that day), especially because of the audio-guide, which included quite a bit of history and background about the bridge, along with the song itself to (rather unusual) beats.

To see the bridge's arches, though, you'll have to be off, not on it. But to dance, you can choose... on top or beneath it?

Well - IS it the most famous bridge in France?

That's up to you! Other famous bridges in France include:

and there are others but to me, YES. If there's one bridge in France most people can name, it's the Pont d'Avignon!

Dying to hear the song itself? Here we go! 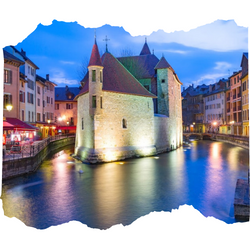 Things to Do in Annecy (France's Prettiest Town?) 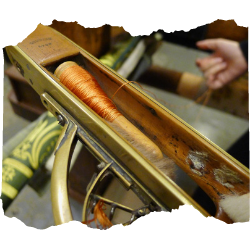 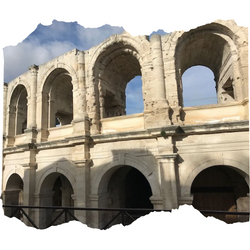