A day trip from dijon to the Auxois, the heart of burgundy

Welcome to the Auxois, an off-the-beaten-path corner of Burgundy not enough people visit even though it makes for a great day trip from Dijon. Below I'll tell you a bit about the region, and about its most interesting culinary, cultural and historical highlights.

Not far from Dijon, to the west of the fabled Côtes de Nuits and Côtes de Beaune vineyards in the Côte d'Or département, is the Auxois, a region of rolling hills and gentle canals, of bursting greenery fed by the waters that criss-cross the region.

From end to end is the Canal de Bourgogne, the region's backbone and a wonderful way to discover the region – by barge, by bike or on foot (and yes, of course you can drive, too).

This is a valley of farms, where some of France's best cattle comes from, but also of forests, and... once upon a time, vineyards, most of which have over time been destroyed by phylloxera.

This is also a land of deep history, intriguing castles and Gallo-Roman ruins, an ideal place to disconnect from life in the city. Villages cling defensively to hilltops, as

From a disgraced count to a war victory by Caesar, get your culture bonnet on and prepare to be thrown into the history of France.

This day trip from Dijon is for...

Lovers of history, especially Gallo-Roman history and the reign of Louis XIV, for cheese aficionados (there's a wonderful specialty cheese from the Auxois), admirers of beautiful gardens, nature lovers, and anyone curious about the canals of Burgundy.

The best time to visit the Auxois is summer, or during the shoulder season. 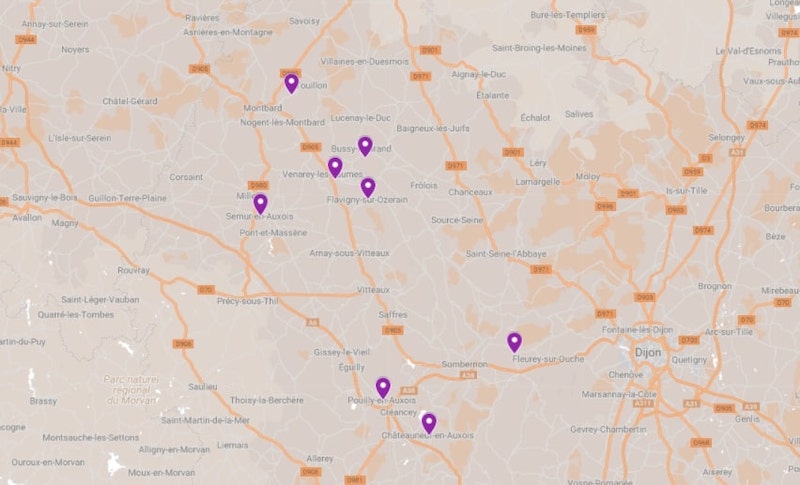 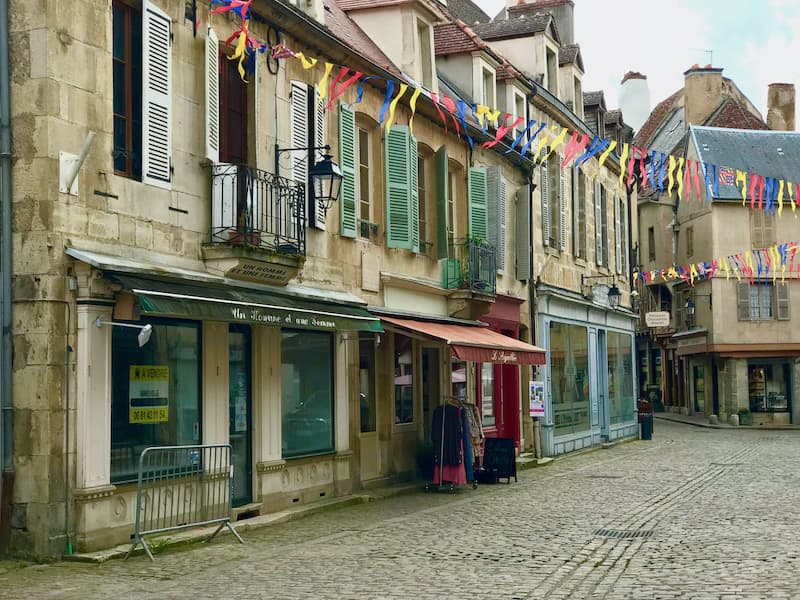 The medieval streets of Semur-en-Auxois

If your idea of a medieval French village involves a fortress, ramparts and narrow twisty streets, then you've arrived. Legend has it the village was founded by Hercules, abandoned, and re-occupied by Germanic invaders during the 5th century.

First came the fortress and then, around it, a hamlet took shape, cascading from the castle to the river below.

As the wars of religion ended, many of the defenses were destroyed, ramparts eliminated and moats transformed into gardens. 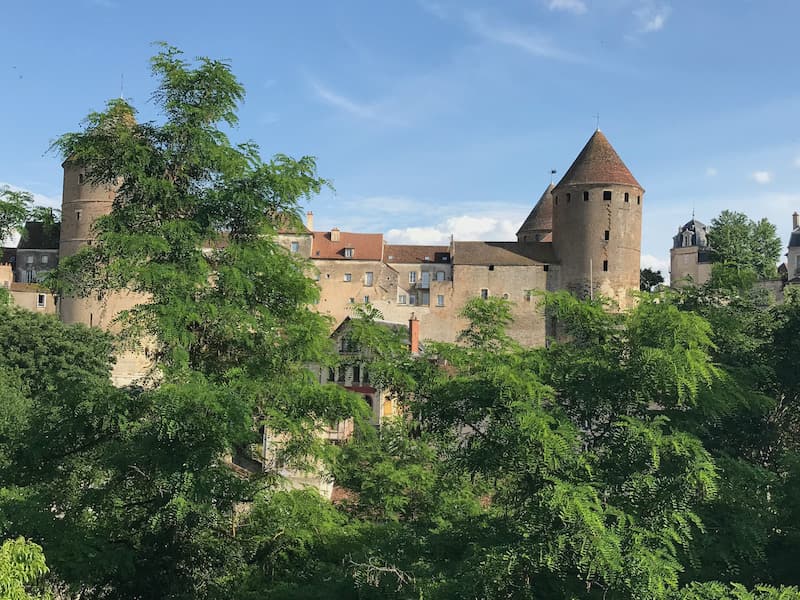 The château, seen from the hill across the river 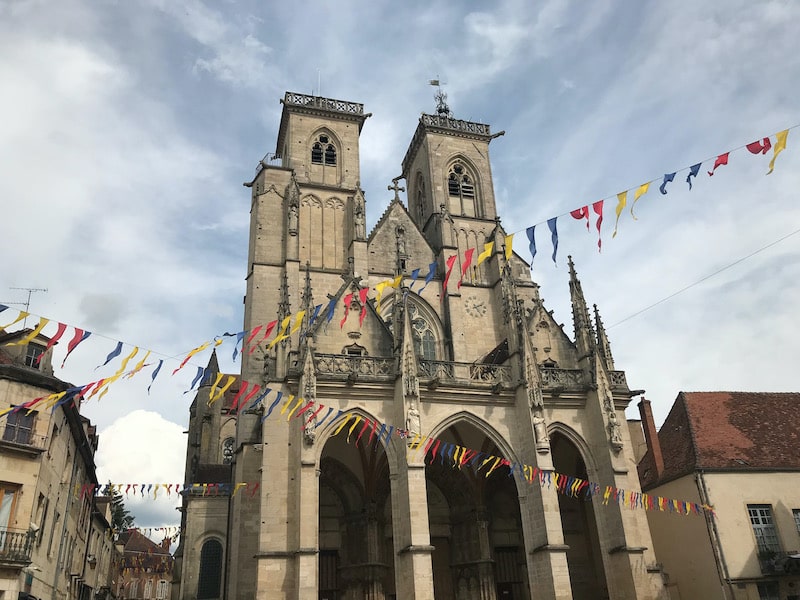 Semur-en-Auxois is what is called a "pays d'art et d'histoire", a land of art and history designated as important to France's cultural heritage.

Today you can walk through its medieval gates and along cobblestoned streets, admiring ancient homes and convents but also delving into science and culture: long known as the "little Athens of Burgundy", savants and scientists have called this town home for centuries. In fact, a trip to the eclectic municipal museum will unveil not only paintings and sculpture, but a world-class collection of catalogued fossils.

The 13th-century church, Notre-Dame, is a highly stylized Gothic build, complete with gargoyles and stained glass.

One of the best vantage points is the Pont des Minimes, the bridge across the river dominated by the fortress.

It is both a village and a cheese. But you'll smell the cheese before you see the village. Époisses is one of the most pungent French cheeses, especially when it is mature and at room temperature (as it should be), runny and melting. Strangely, though, the taste isn't half as strong as the aroma and that makes it worth trying; it also happens to be delicious.

When in the village of Époisses, just 15km/9mi from Semur, first visit the château and church, but then head straight to Berthaut to buy some cheese – or at least to look around. Beware if you're headed to Paris, however: this cheese is so aromatic it's apparently banned on the capital's public transport system. If you'd rather taste than carry, ask for it to round out your restaurant meal. 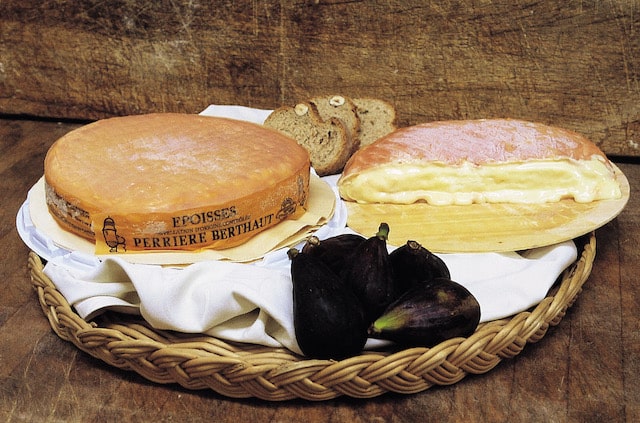 This village belongs to the network known as the "most beautiful villages in France", and has a delightful jumble of ancient streets and alleyways that have been magnificently preserved or restored.

As you walk around, the village might start looking familiar: that is because it was used as the backdrop for the movie, Chocolat. In fact, the small chapel of the 8th-century abbey in the village was restored courtesy of the film crew, in exchange for facilities during shooting. 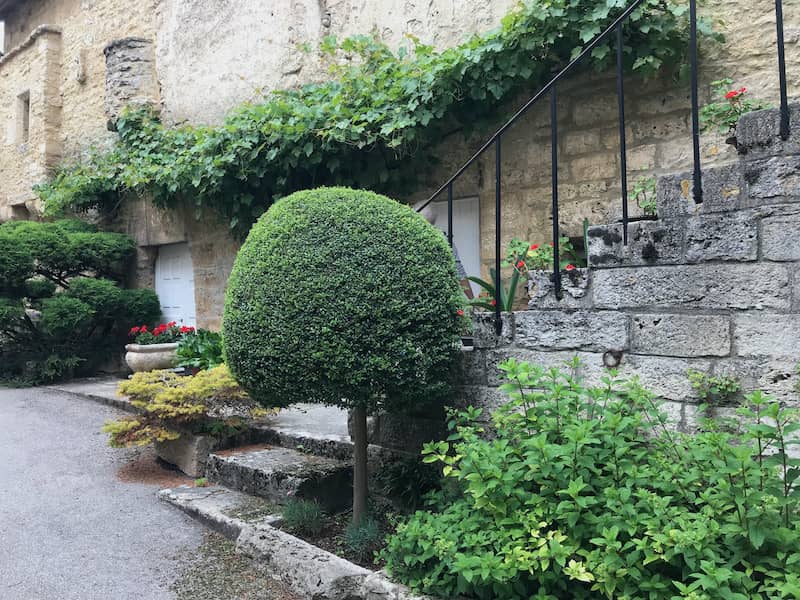 The welcoming stone houses are still lived in, and if it's open, stop by La Grange for lunch. Sit outside and enjoy the comings and goings along the small square. The restaurant is hyper local, with producers doing the actual cooking, along with what seemed like all the members of the family. Here's more about Flavigny. 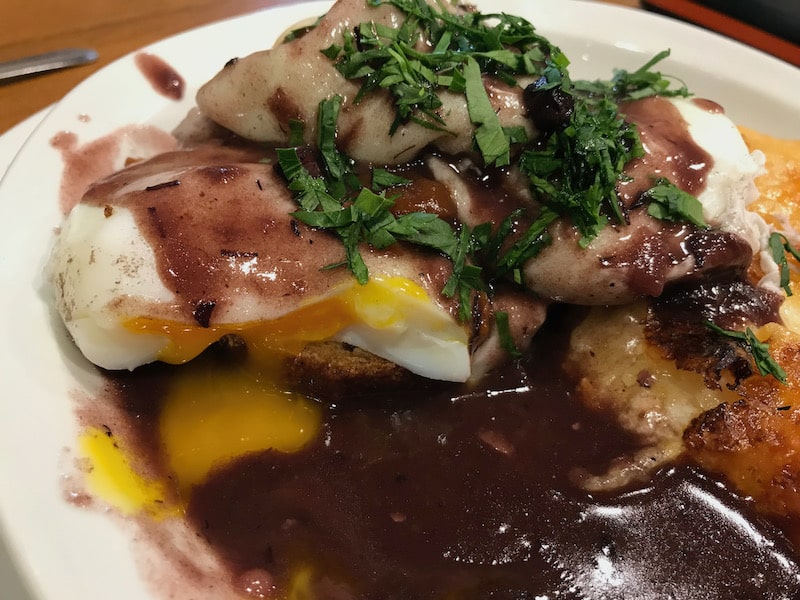 These are oeufs en meurette, a local specialty: poached eggs, with garlic and herbs, and a thick wine sauce (and some potatoes au gratin, of course!) 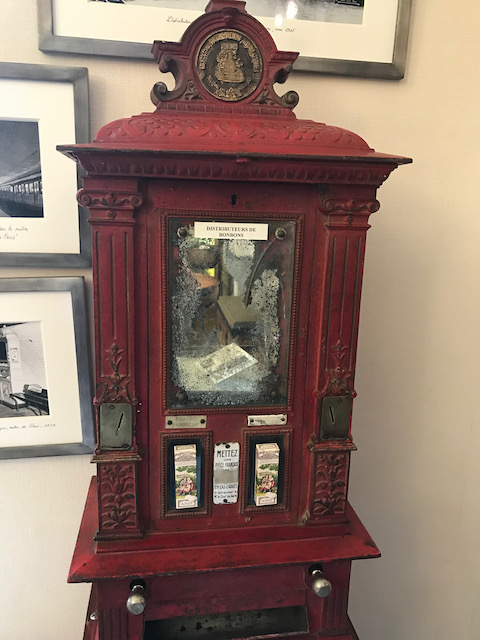 When you visit the village, right at the entrance you'll find a candy factory! These are the candies my grandmother used to love, and which have survived since perhaps as far back as Roman times : tiny, crunchy balls of sugar-coated anise seeds.

An ancient crypt is part of the complex, and you'll get to see how these candies are made: huge rotating vats gently add layer upon layer of sugar. They come in many flavours, from lemon to liquorice. My favourite? A toss-up between violet and rose.

The little museum that abuts the factory is a gem: it's filled with history, old documents, but most fun of all, unusual 19th-century contraptions, like an anise vending machine for the Parisian metro. Find out more here.

In the year 52 BCE, Julius Caesar fought two decisive battles against the irrepressible Gauls. The first was at Gergovia, in Central France – the Gauls won that battle.

But the second one was here at Alésia, and Caesar subdued the Gauls in what would become the Gauls' last stand. From here on in, Rome would spread its culture across the land. 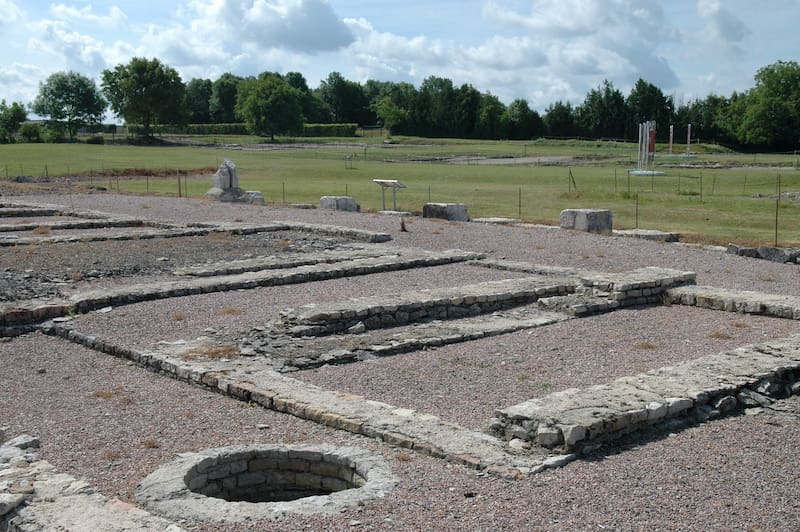 A tiny part of the ruins at Alésia, the last stand of Vercingétorix, leader of the Gauls. Photo courtesy Côte-d'Or Tourisme © R. KREBEL

The history of the battle, as well as that of the Gauls in the region, is beautifully showcased in the MuséoParc Alésia, an interactive museum a few kilometers from the actual site.

History is kept alive with re-enactments each year, Romans fighting Gauls at the height of summer (sweaty armour included). The exhibits are described in great detail and the museum is an important source of information for those of us curious about the history of the Gauls.

You'll spend 2.5 hours visiting these sites, about 1.5 hours for the museum, and a good hour getting to and visiting the ruins.

Count Bussy-Rabutin was a respected military leader and courtier at Versailles, during that precious time when Louis XIV turned Versailles into the center of his universe. 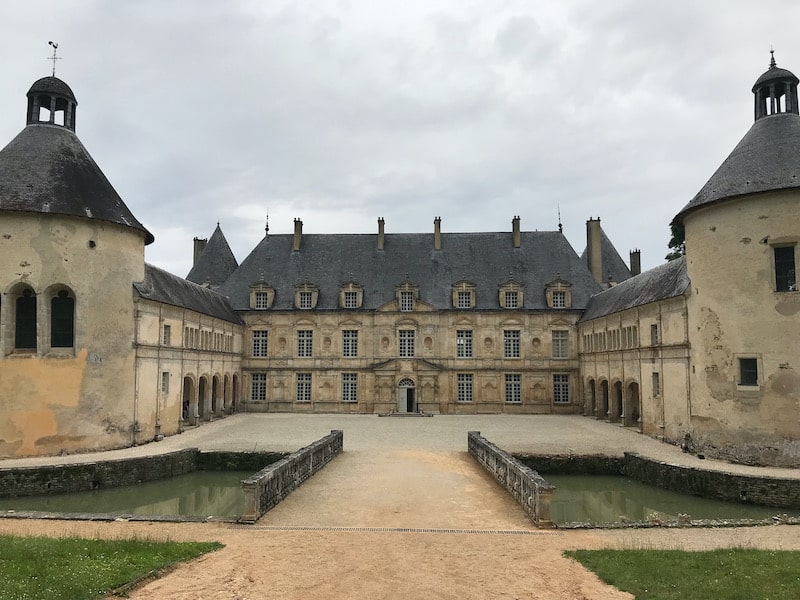 But the count had a turbulent personality, falling in and out of love and acting out in excess to the point of attracting the king's attention. A few untoward undertakings (some sacrilegious, some merely lascivious) landed him first in prison at the Bastille, and finally into exile in this château.

The extraordinary château of Bussy-Rabutin is the product of those years of exile, and as you explore its hallways and rooms, you'll be overpowered by a range of emotions, the same ones Bussy-Rabutin undoubtedly felt beas he laboured to fix up his rural home: loss, rejection, love, jealousy, irony.

Visiting the grounds, the (remarkable) gardens and the château should take about 2 hours.

More places to see around the Auxois 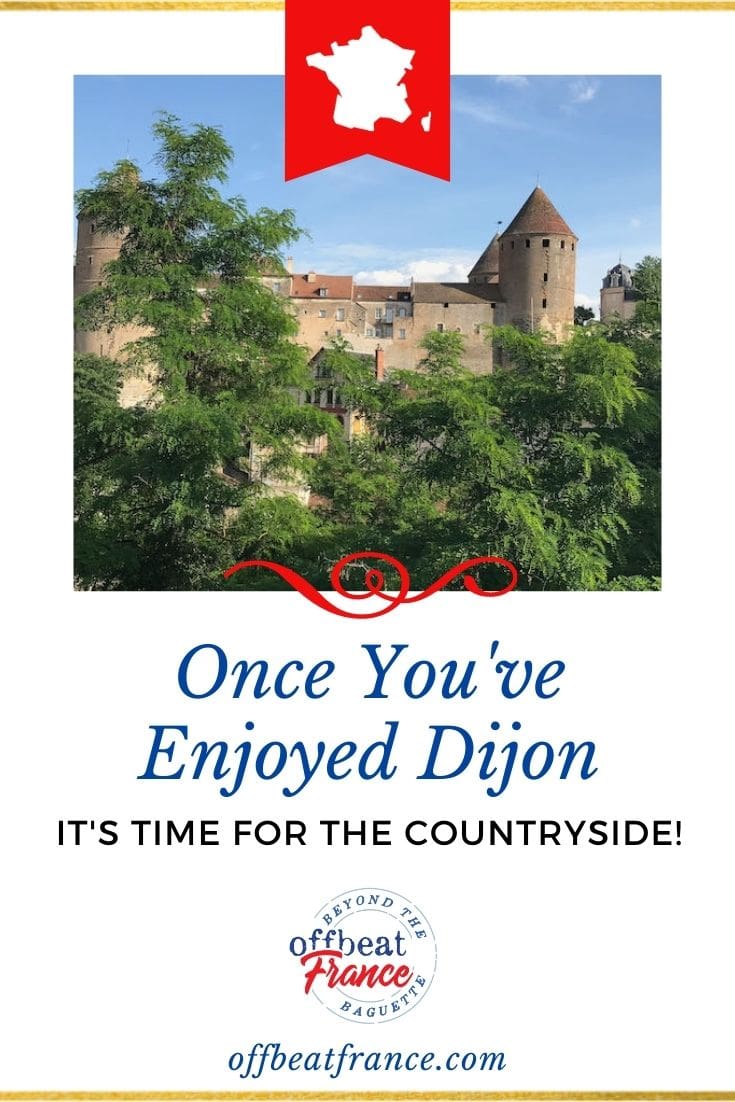 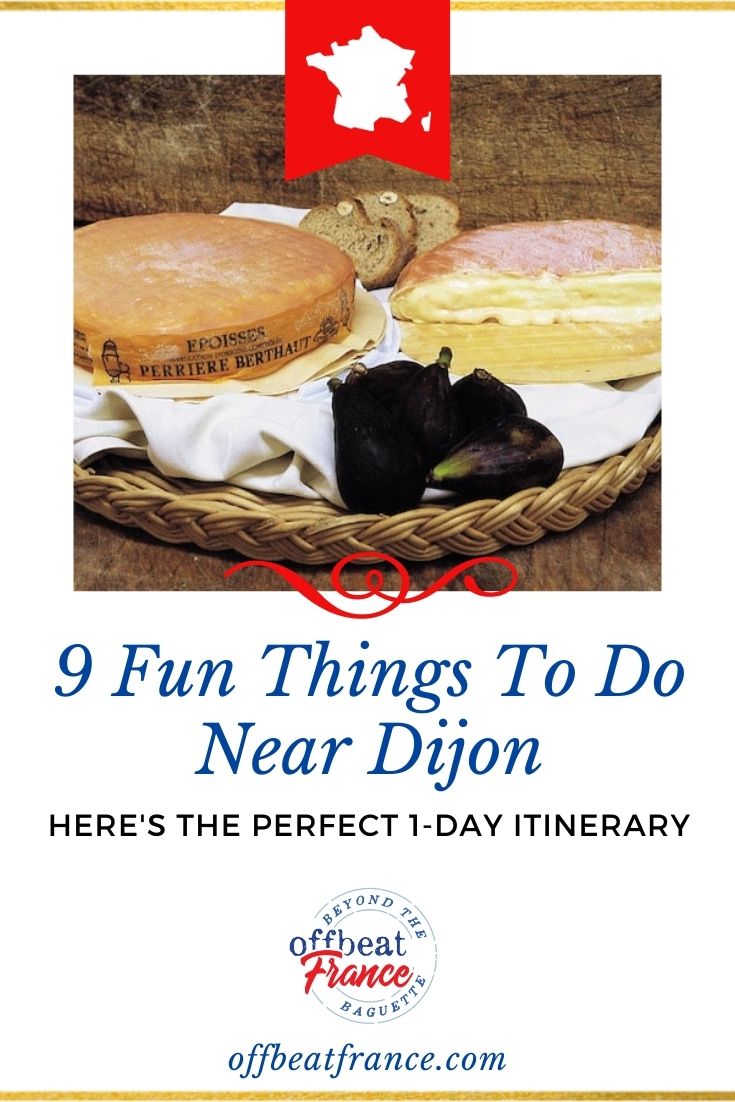 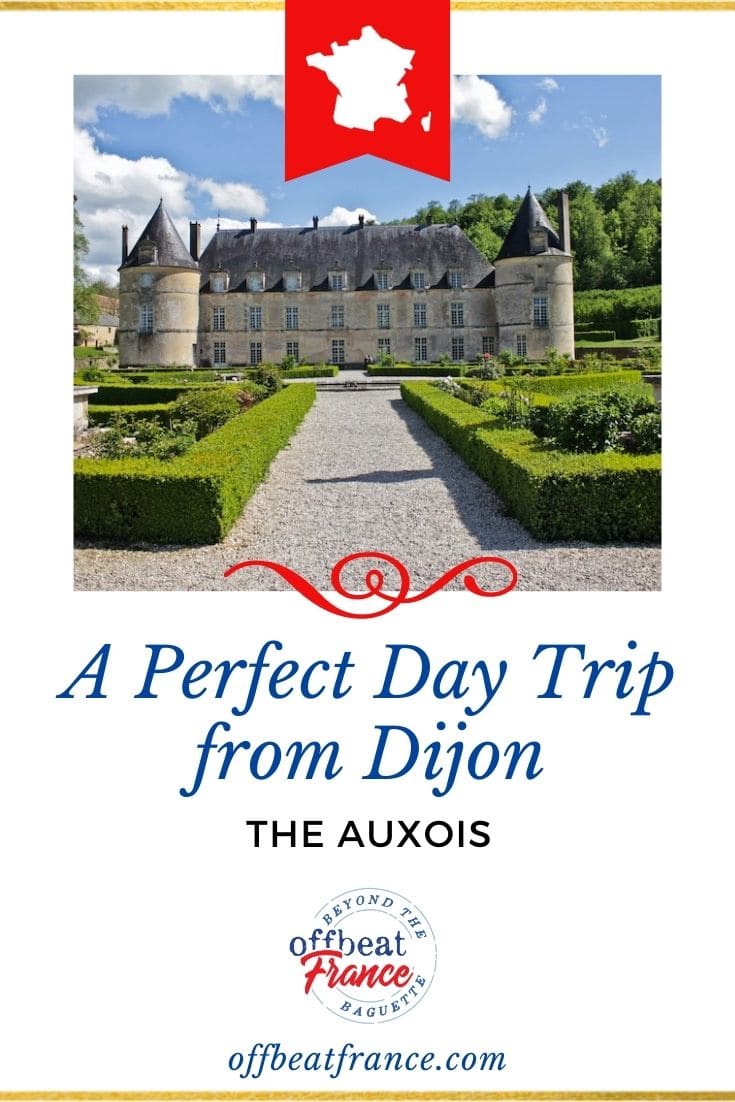